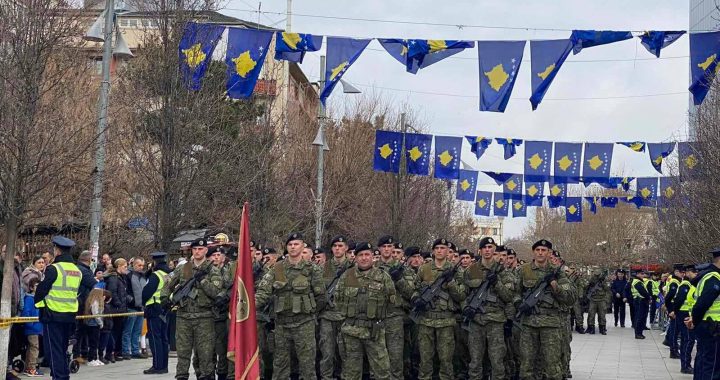 Country marks 14th birthday of statehood amid uncertainties over its progress in several key areas.

With Prishtina’s main square decorated in blue-and-yellow flags, Kosovo Security Force troops paraded under the eyes of gathered citizens as they marked the 14th anniversary of the country’s independence from Serbia.

Speaking before the crowd assembled at the city’s Zahir Pajaziti Square, President Vjosa Osmani recalled the 2008 declaration of independence as Kosovo’s greatest-ever achievement.

“Kosovo’s independence is our greatest achievement, this is our national project. Institutions with all mechanisms guarantee that the violation of territorial and constitutional integrity will not be allowed,” Osmani said.

“Let us remember that the creation of the state of Kosovo has been the dream of dozens of generations, which our generation was lucky to live,” she added.

Prime Minister Albin Kurti meanwhile dedicated a part of his speech to the fight against corruption.

“If corruption threatens us every day, we will fight it every hour. Kosovo is everyone’s issue, in order to progress, it needs all of us,” Kurti said. He also said Kosovo’s journey to independence had been long and arduous.

Kosovo celebrates the 14th anniversary of its statehood with much still undone. It is now the only country in the region that still does not have a visa-free agreement with the European Union.

Although the European Commission in 2018 confirmed that Kosovo had met all the criteria for the abolition of the visa regime, and the European Parliament voted in favour of this, implementation remains in the hands of the member states. Often promised over the years, visa liberalization remains an unfulfilled wish.

During this process, many agreements have been signed but few have been implemented.

This year started with international pressure on both countries to return to talks and work towards a final agreement, which still seems out of reach.

In his congratulatory remarks, US State Secretary Antony Blinken urged Kosovo to engage in the EU-facilitated dialogue.

“We look forward to Kosovo rightfully taking its place alongside its neighbours in European and Euro-Atlantic institutions and reiterate our support for the EU-facilitated Dialogue as the way to achieve an agreement on normalized relations centered on mutual recognition,” Blinken said.

The formation of a semi-autonomous Association of Serb-majority municipalities in Kosovo is one of the most controversial issues in the EU-facilitated dialogue.

Kosovo agreed years ago to implement it, but governments have since changed their mind and gone cold on the idea.

Flow of recognitions has stopped

In 14 years of independence, the republic has been recognized by 117 countries, according to the Foreign Ministry.

The last country to recognize Kosovo was Israel, on February 1, 2021. This followed the Washington agreement between Kosovo and Serbia, signed in the US in September 4, 2020.

This agreement caused a stir because although it brought recognition from Israel, it also stopped Kosovo from applying to join international organizations for a year, according to the terms of a moratorium agreed between the parties.

This stated that Kosovo “will agree to implement a one-year moratorium on its recognition campaign and will refrain from formal or informal requests to any country or international organization to recognize Kosovo (Pristina) as an independent state”.