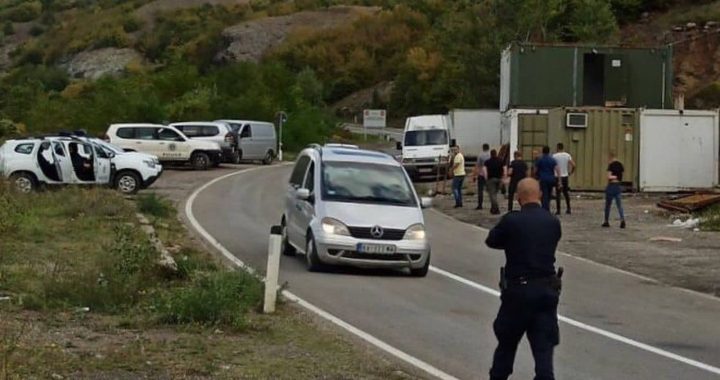 Kosovo police in the Serb-majority north of the country on Monday. Photo: BIRN

The authorities deployed special police units on Monday morning in Serb-majority northern Kosovo after hundreds of Serbs blocked roads near the Jarinje border crossing point and in the municipality of Zubin Potok in protest at the government’s decision to make them use Kosovo vehicle licence plates instead of Serbian ones.

Kosovo’s Interior Minister Xhelal Svecla wrote on Facebook that the decision “obliges the provision of temporary license plates for all vehicles that have Serbian licence plates and enter the territory of the Republic of Kosovo at all border crossing points”.

In Pristina, Prime Minister Albin Kurti insisted that the new measures “are not directed against the Serb community”.

“Nothing extraordinary or discriminatory is happening today. We are just starting to implement an agreement both Serbia and European Union have agreed to,” Kurti told MPs at Monday’s parliament session.

“Today’s actions undertaken by relevant institutions… are not aimed to infringe the right of Serb citizens for free movement or provoke any destabilisation,” he added.

Amid the rising tensions, Serbian President Aleksandar Vucic scheduled an emergency session of his National Security Council for Tuesday morning, at which the main topic will be the events in Kosovo, Tanjug news agency reported.

Goran Rakic, the leader of the Belgrade-backed Kosvo Serb political party Srpska Lista, called on Vucic to respond to the Pristina government’s decision.

“This is a direct threat to people who are worrying about how they will provide bread for their children. We have also informed the [European Union’s] special envoy [for Kosovo], Miroslav Lajcak, and asked for EU help. And I call on President Vucic: ‘Vucic, react,’” Rakic said at the Jarinje border crossing, Tanjug reported.

The Kosovo government decision imposes a principle of reciprocity by requiring the removal of Serbian licence plates and their replacement with temporary Kosovo ones. People driving cars with Kosovo plates have been forced to do this while entering Serbia for two decades. They also have to pay an insurance fee. Kosovo also imposed an insurance fee at the border on Monday, N1 TV reported.

Serbia does not recognise either Kosovo or licence plates with the letters RKS, for Republic of Kosovo.

The decision to seek reciprocity came after Kosovo’s Deputy Prime Minister Besnik Bislimi announced on September 9, that Pristina will not continue with its existing agreement on licence plates with Belgrade, which was signed in 2011.

There are two types of plates in Kosovo, starting with KS (for Kosovo) and RKS (for Republic of Kosovo). Plates with the letters KS were issued under the former UN administration of Kosovo.

The former Kosovo government issued a decision in mid-September 2020 to stop issuing new licence plates with the registration KS, and Svecla said on Monday that as of September 15, the KS plates are no longer in circulation in Kosovo.

Since coming to office this year, Prime Minister Kurti has repeatedly pledged that his government will demand reciprocity in all areas from Serbia.