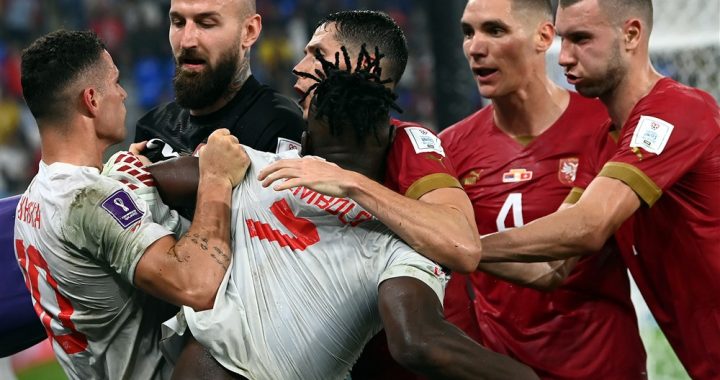 Kosovo's Football Federation has filed another complaint to FIFA against Serbia’s team for alleged racist incidents in last Friday's World Cup match against Switzerland, which the Swiss won.

A World Cup match between Serbia and Switzerland on Friday in Qatar has stirred many off-pitch reactions as Kosovo’s Football Federation, FFK, presses FIFA to sanction Serbia for alleged ethnic slurs from Serbia’s bench and fans.

Serbia was eliminated from competition after defeat by Switzerland 2:3 in a match that was marred by scuffles.

The Swiss team has several players of Kosovo Albanian origin..

On Sunday, the FFK announced it had requested FIFA to sanction Serbia’s football association, “so that fascist chants stay away of football stadiums once and for all”.

FFK was referring to chants against Albanians in the stands from Serbia’s fans and a video which went viral on Friday, when Serbia’s coach, Dragan Stojkovic, allegedly offended Albanians.

“The appearance of slogans with political messages and racist slurs against Albanians were heard during almost the entire match [against Switzerland] and were reported in the world media,” FFK said.

“It is incomprehensible and absurd the hate the public in our neighbouring state has been fed with throughout the years against Albanians, instead of engaging in extending the hand of reconciliation and apology,” it added.

This is second file FFK is sending to FIFA regarding Serbia in less than two weeks. On November 25, FFK called on world’s football governing body to take action over a provocative banner pictured on Thursday in the Serbian team’s locker room in Qatar.

The banner was reportedly pictured before Serbia played Brazil on Thursday in the first round of the World Cup. Brazil won 2:0.

The banner showed a map of Kosovo with a Serbian flag within it and with the words: “No Surrender” (“Nema Predaje”) – seen as a reference to Serbs in northern Kosovo resisting Kosovo government pressure to change Serbia-issued licence plates for Kosovo-issued ones.

During the match, Kosovo-origin Swiss captain Granit Xhaka was the centre of attention twice over on-field incidents with Serbian players and staff.

After the match, he took off his jersey and wore backwards the one of his team mate Ardon Jashari; Jashari a name that has great significance for Kosovo Albanians.

Adem Jashari was a commander of the Kosovo Liberation Army, KLA, the guerilla force which took on the Serbian then government of Kosovo.

He was killed in March 1998 by Serbian police in a massacre together with around 60 members of his family, including woman and children, in a three-day fight.

After the match, Xhaka said his gesture “has no political background whatsoever” and that he wore the jersey based on a promise he made to his team mate, also originally from Kosovo.

However, international media have reported that he could be at the centre of a FIFA investigation over the gesture.

Behgjet Pacolli, a Kosovo tycoon-turned-politician and former Foreign Minister, on Sunday offered to pay any potential fine Xhaka might face.

“If the Jashari name disturbs FIFA or the world and Granit Xhaka is fined for holding this sainted name after the match, I personally will pay that fine, on behalf of Albanians. I have communicated this personally today [Sunday] to Xhaka,” Pacolli said.

Asked on Sunday why he had not reacted to the events on Friday, Albania’s Prime Minister, Edi Rama, said Switzerland was another state.

“Because it the national team of another state. And [by reacting] I would fan the flame of a nationalism … and nationalism is always dangerous. It is not necessary and it seems to me that whoever does it, is not doing the right thing,” Rama said.

Xhaka, together with Xherdan Shaqiri who scored the first goal against Serbia on Friday, are both ethnic Albanians from Kosovo, which broke away from Serbia in war in 1999 and declared independence almost a decade later but is not recognised by Serbia.