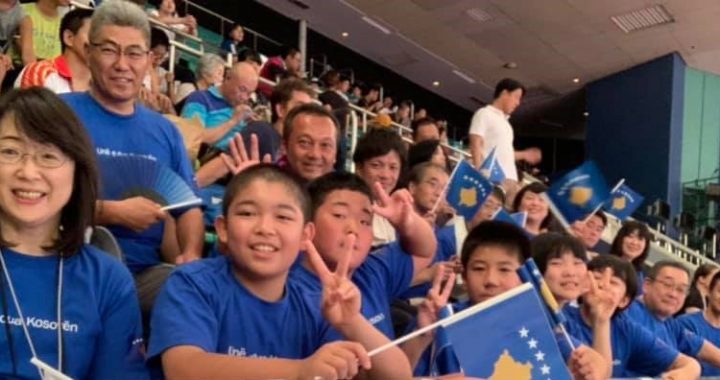 Distria Krasniqi, Majlinda Kelmendi and Loriana Kuka have all won bronze medals at the 2019 World Judo Championships held in Tokyo, Japan from August 25 to September 1.

Two-time World Champion and current Olympic Champion Kelmendi was Kosovo’s best chance for a gold medal, but succumbed to Japan’s current world champion Uta Abe in the semi final of the -52kg competition on Monday.

It was the first ever contest between the two judoka, whom most people expect to provide the main competition for each other in next year’s Olympics, also set to be held in Tokyo. This first meeting was an epic encounter, with 19-year-old Abe eventually pinning Kelmendi to the floor to win in golden score, after the time limit of four minutes was not enough to separate the pair.

Abe went on to win the gold, throwing her opponent Natalia Kuziutina on her back within 33 seconds in the final. At the champions press conference, Abe was full of praise for Kelmendi, declaring the Kosovar her biggest rival for the 2020 Olympic gold.

“Her judo is amazing, she has great throwing skills,” Abe said. “But that’s a motivating factor for me. To be a legend you have to beat one, and she’s a legend in Japan.” Kelmendi’s status in Japan was also demonstrated by a number of Japanese fans in the stadium waving Kosovar flags and wearing t-shirts bearing the message “I love Kosovo” in Albanian.

For this tournament, Kelmendi and her fans had to settle for bronze after she secured a repechage victory over Portuguese Joana Ramos, earning the Kosovar a place back on the World Championship medal podium for the first time since 2014.

The day before, Kelmendi’s sparring partner in Peja, Distria Krasniqi, also stood on the podium with a medal hanging from her neck, the 23-year-old adding a World Championship bronze to her European Championship silver from last year.

Having beaten 2016’s Olympic Champion Paula Pareto to win Pool B of the -48kg competition, Krasniqi lost her semi final to 2017 World Champion Funa Tonaki, putting her into the repechage.

Krasniqi then won a dramatic 33-second victory against Spain’s Laura Martinez Abelenda, throwing her opponent to score ippon and secure the most prestigious medal of her career so far.

On Friday, Loriana Kuka also secured the biggest victory of her career to date to pick up the Kosovo team’s third bronze in the -78kg competition.

Kuka, the niece of the team’s coach Driton Kuka, was beaten in the quarter-finals by two-time world champion Mayra Aguiar, leaving the Kosovar requiring two victories in the repechage to win a medal. 22-year-old Kuka did exactly that, first taking down former world number one Natalie Powell before defeating 2019 European Games winner Klara Apotekar to earn a place on the podium.

On Tuesday, sister and brother Nora and Akil Gjakova also competed in the -57kg and -73kg competitions respectively, with both notching up victories but neither coming out with a medal.

Akil beat German Igor Wandtke in the second round before losing to Tajik judoka Behruzi Khojazoda, the Tajik going on to a fifth place finish. Nora meanwhile reached the quarter final where she suffered an unexpected defeat to Bulgarian Ivelina Ilieva, the surprise package of the competition.

The defeat left Nora in the repechage, requiring two victories to secure a third bronze for the Kosovo team. However, her first bout ended in defeat, with young French judoka Sarah Cysique landing an early victory against the Kosovar, leaving Nora in joint 7th place.

Note: The article was updated after Friday’s competition.