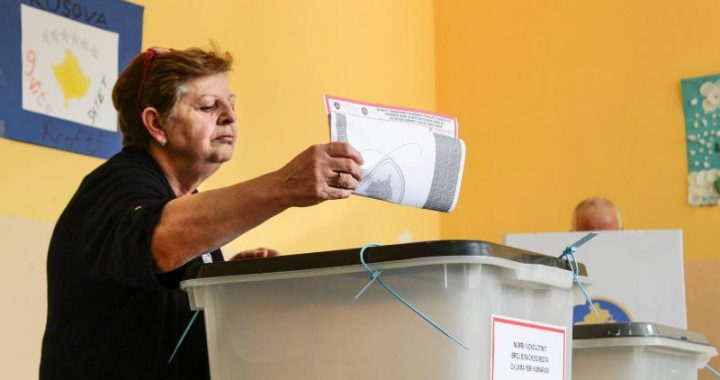 Candidates for prime minister confirmed as election date is set

Vjosa Osmani’s nomination by LDK as candidate for prime minister completes the race for Kosovo’s parliamentary elections, now confirmed as being held on October 6.

Vjosa Osmani has been nominated as the Democratic League of Kosovo, LDK, candidate to become the country’s next prime minister, her nomination confirmed at an afternoon meeting of the country’s oldest political party on Monday.

She had faced competition from incumbent mayor of Gjilan, Lutfi Haziri, but received her party’s backing to become the second woman to stand as a candidate for prime minister in Kosovo after the nomination of Mimoza Kusari  from New Kosovo Alliance, AKR in 2010.

Osmani served as an LDK deputy in the last legislature, having received more than 64,000 votes in the June 2017 elections, more than any other woman standing for election to the Assembly.

The news came on the same day that the date of the election was officially confirmed by Kosovo President Hashim Thaci as being October 6.

Osmani is the last of the candidates for prime minister to be announced by the major parties.

Vetevendosje will put forward head of the party Albin Kurti as their candidate, a position he also occupied during the previous parliamentary elections in June 2017. Kurti was the most voted for individual politician last time around, with more than 143,000 votes, but failed to become prime minister as Vetevendosje received 40,000 votes fewer than the PAN coalition, made up of PDK, AAK and NISMA.

Another confirmed candidacy is that of outgoing prime minister Ramush Haradinaj, who is the nominee of a pre-election coalition reached between Haradinaj’s Alliance for the Future of Kosovo, AAK, and the Social Democratic Party, PSD. His candidacy was confirmed when the agreement between the two parties was signed last week. As PAN’s candidate for prime minister in the previous parliamentary elections, Haradinaj received 102,000 votes.

Haradinaj’s partner in the outgoing coalition government and former Speaker of the Assembly Kadri Veseli also announced his candidacy for Prime Minister. At the previous elections, Kadri Veseli won 129,000 votes but had already ceded the nomination for prime minister to Haradinaj a few minutes before the Kosovo Election Commission’s deadline for pre-election coalitions.

Another former member of the PAN coalition nominated as a candidate for prime minister is Fatmir Limaj, who served as deputy-prime minister in the outgoing government. Limaj’s candidacy was confirmed last week, after a new coalition was signed between his party Nisma and the Kosovo New Alliance, AKR. As part of PAN, Limaj received 31,000 votes at the June 2017 parliamentary elections.