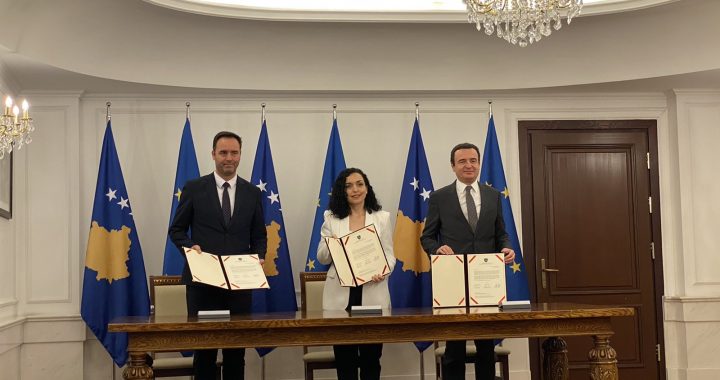 Three main Kosovo leaders have signed the application for EU membership, a process which is not expected to go smoothly because of political complications stemming from five EU members not yet recognising its independence.

At a ceremony held on Wednesday, three Kosovo institutional leaders signed the application for European Union candidacy in a move considered as taking the country a step closer to the 27 member-state organisation.

Calling it an ‘historic moment’, President Vjosa Osmani said Kosovo is taking a crucial step toward its ambition to become a full member of the EU family.

“For Kosovo and its citizens there has never been an alternative, but dreams become reality only when you work for them,” Osmani said.

In its latest progress report on Kosovo, the EU’s executive arm, the European Commission, commended Kosovo’s progress, saying it had “strengthened its capacities to coordinate the implementation of the commitments and obligations arising from the Stabilisation and Association Agreement, SAA, and ERA II [European Reform Agenda phase 2], and has improved reporting mechanisms.”

Kosovo, however, is in a unique position: five of the EU’s 27 member states – including Spain, Greece, Slovakia, Romania and Cyprus – do not recognise it as an independent state and are unlikely to do so without a binding agreement to settle relations between Serbia and Kosovo, something that looks far from imminent.

Kosovo signed a Stabilisation and Association Agreement, SAA, with the EU in June 2015.

“This is the first step in our membership path, a path that has been long and not easy. We deserve to be a candidate country,” Kosovo’s parliament speaker Glauk Konjufca said on Wednesday.

Prime Minister Albin Kurti said that the application will be submitted to the Czech Presidency of the Council of the EU in what will be the final days of its six-month tenure. Sweden will take over the EU Presidency for the first six months of 2023.

“The progress will depend from our commitment to deep and transformative reforms that advance democracy, strengthen rule of law and develop our economy,” Kurti said.

“Obstacles and challenges toward the membership we will pass through democratic development and social progress,” he concluded.