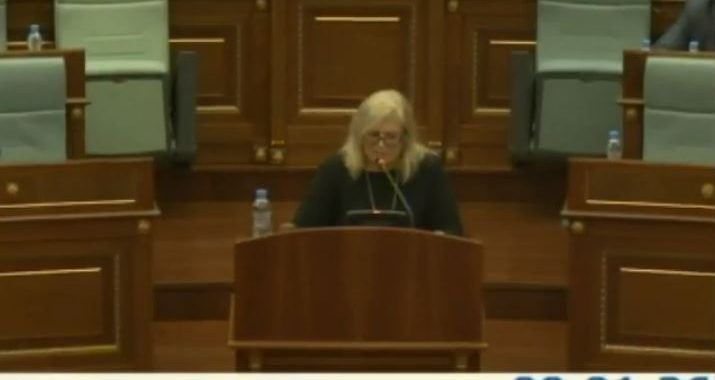 Kosovo politicians reacted angrily after MP Flora Brovina showed a graphic photograph during a debate in the Kosovo parliament which she said showed Serbian soldiers raping an ethnic Albanian woman during the war.

Flora Brovina, an MP from the ruling Democratic Party of Kosovo, PDK, sparked angry reactions on Thursday when she showed a photograph during a parliamentary debate which she said showed three Serbian soldiers raping an ethnic Albanian woman during the war.

“It’s like we have been silenced and we are prevented from having the opportunity to speak about these things,” Brovina said as she showed the uncensored photograph during a debate about a parliamentary resolution accusing Serbia of committing genocide during the war.

After the incident, the Kosovo special prosecution said it has opened an investigation into the photograph, the authenticity of which has not yet been independently verified.

But other women deputies reacted furiously to Brovina’s move, calling it unethical and inhuman.

MP Saranda Bogujevci, from the opposition Vetevendosje (Self-Determination) party, argued the photograph should not have been made public.

“Mrs. Brovina, I’m sorry but what you did is completely wrong. You showed the victim and you say she’s alive. Imagine how she feels. This is not treating a person with dignity,” said Bogujevci, who is a war victim herself.

Bogujevci asked Kosovo media outlets that have published the picture to remove it from their sites.

“It is a request from family members and they are concerned,” she said.

Former Kosovo President Atifete Jahjaga, who advocated for the rights of wartime rape victims while she was in office, also criticized the publication of the photo, saying that it could lead to the victim’s identity being discovered.

“The publication of such images that show the rape of a woman by Serbian military forces during the war is a serious shock for thousands of survivors of sexual abuse during the Kosovo war,” said Jahjaga.

“It is disgusting, sickening and shameful that a Kosovo MP who used to raise her voice for the rights of women and men who were raped during the war in Kosovo, today uses the Assembly building of make such a photograph public,” she added.

During the parliamentary debate, Brovina, a former human rights activist who was arrested by the Serbian authorities in 1999, said she has heard many testimonies from Kosovo women who were raped by Serbian troops.

“I have stories of these women who haven’t been brave enough to testify at the Hague Tribunal,” she said.