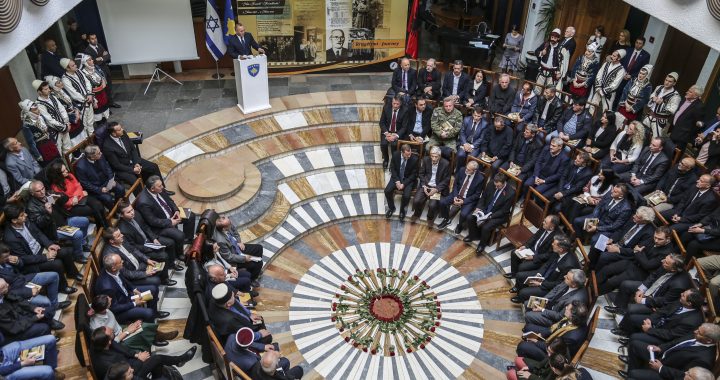 The Prime Minister attended a book launch about the Albanian families that protected Jewish families during WWII and said that Kosovo is committed to fighting contemporary forms of fascism.

Kosovo Prime Minister Ramush Haradinaj attended a book launch in Prishtina on Thursday to mark the International Day Against Fascism and Antisemitism.

“Today, in Prishtina, in Kosovo, we remember and reflect on a night known as the Night of Broken Glass, November 9, 1938. This night in Germany was marked by the breaking of thousands of Jewish-owned display windows, the burning of hundreds of synagogues, and the killing of hundreds of innocent Jews,” said Prime Minister Haradinaj at an event organized at the National Library of Kosovo.

The Day Against Fascism and Antisemitism was established to protest contemporary forms of fascism and antisemitism and to remember Kristallnacht, the 1938 pogrom seen as the symbolic beginning of the Holocaust.

At the event, authors Skender Asani and Albert Ramaj launched their book, Rrugëtimi (The Journey), which documents Albanian families who gave shelter to Jews during Nazi persecution.

The Israeli Ambassador to Macedonia, Dan Oryan, sent a letter which was read at the book launch.

“Books can only be relevant if the young generations will read them and learn from them. I hope this book will have a wide audience, a young audience. This is a story that should be told,” the letter said.

Haradinaj concluded by saying that Kosovo is “showing commitment in the war against fascism and antisemitism.”

“We’ve chosen the path of civilized people of the world to give the message of peace and harmony among people, regardless of their race, language, religion and nation,” the Prime Minister said.