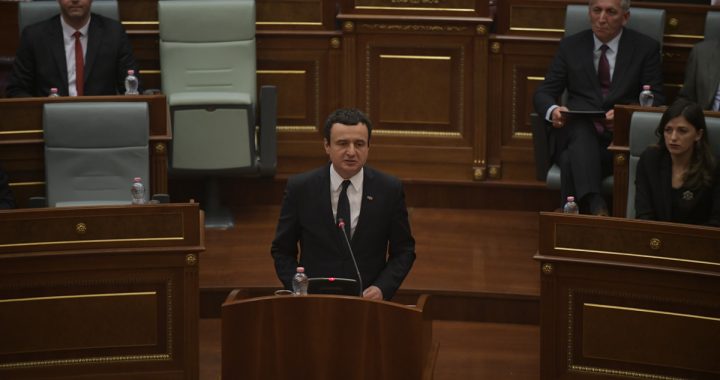 Prime Minister Albin Kurti has apologised for not being able to implement his plans to gradually remove the 100 percent tariff on goods imported from Serbia having failed to convince coalition partners LDK.

In a Facebook post made on Sunday, Kosovo Prime Minister Albin Kurti apologised for not being able to implement the plans outlined in February to gradually remove the 100 per cent tariff on imports from Serbia and Bosnia and Herzegovina.

“Today, on March 15, the 100 per cent tariff on raw materials coming from Serbia should have been removed,” Kurti stated. “This will not happen, as my position expressed on February 26, 2020 has not become a [government] decision. I am sorry about this.”

The prime minister added that his coalition partners in the Democratic League of Kosovo, LDK, were still not convinced of the plan to gradually replace the tariff with reciprocal measures towards Serbia.

Representatives of LDK have been vocal opponents of Kurti’s plans since they were first announced in February. On the day of the announcement, LDK’s Deputy Prime Minister Avdullah Hoti labelled it as “not a decision of the government.”

In a Facebook post made on Sunday Hoti called for the complete removal of the tax. “The tax should be abolished TODAY, IMMEDIATELY, COMPLETELY,” Hoti stated. “There is no room for political tactics with our partnership with the US.”

US Special Envoy for the Kosovo-Serbia dialogue Richard Grenell has been an outspoken critic of Kurti’s plans to gradually remove the tariff, labelling it “a serious mistake” and demanding a removal of the tariff without conditions.

Last week, Grenell’s position was publicly supported by a number of US senators close to President Donald Trump, as well as his son, Donald Trump Jr. The statements helped trigger an extraordinary session of the Kosovo Assembly on Wednesday, which was requested by representatives of the Democratic Party of Kosovo, PDK, to discuss Kosovo-US relations.

On Friday, the Millenium Challenge Corporation, an American foreign aid agency established by the US Congress, pledged to suspend two of its programs until the tariff issue was resolved.

“The United States’ position regarding Kosovo’s tariffs against goods from Serbia is clear,” a statement from the Corporation reads. “Lifting these tariffs will improve Kosovo’s economy and help reduce poverty through economic growth. Until Kosovo’s tariff issue is resolved, MCC will pause implementation of the threshold program and development of the proposed compact program in Kosovo.”

The tariffs were introduced by the previous Kosovo Government in November 2018, following Serbia’s campaign to prevent Kosovo from entering INTERPOL. Serbia has stated that it will not return to the Kosovo-Serbia dialogue until the tariff has been removed.