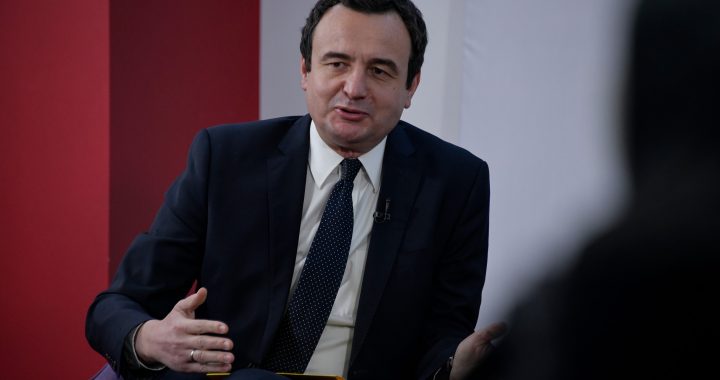 Kurti reveals his approach to the dialogue with Serbia

New Kosovo Prime Minister Albin Kurti has outlined four principles he believes should guide the EU-facilitated dialogue with Serbia and dismissed the need to discuss the formation of an Association of Serb-Majority Municipalities.

In a discussion aired by the Kosovo Foundation for Open Society, KFOS, on Tuesday night, new prime minister Albin Kurti outlined the four key principles that he believes should guide the EU-facilitated dialogue with Serbia.

The first principle was that the reality of Kosovo’s independence must be accepted. “We can not go back on independence. If that were possible, we would ask for more,” Kurti said. “Independence was a compromise and was not declared last year, but 13 years ago.”

The new prime minister added that the truth of the Kosovo war must also be accepted, stating that this was his second principle. “We cannot sit at the negotiating table forgetting and flattening history,” he said. “Serbia must acknowledge the crimes it has committed in Kosovo, and its government must distance itself from them.”

The third principle Kurti outlined was that Kosovo and Serbia must sit at the dialogue table as equals. “We can not talk as unequal parties,” he stated. “Kosovo has been more of a subject of the dialogue than a party to the dialogue, and that needs to change.”

Kurti also argued that the dialogue should be structured in a way so that “it is citizens who benefit from future talks, not political leaders,” which he said was his fourth guiding principle.

Earlier this month, Kurti met with EU Special Envoy Miroslav Lajcak, who has spoken of the need to continue the dialogue as soon as possible, and build on talks between the Hoti administration and the Serbian delegation.

However, during the KFOS discussion, Kurti insisted that the new Kosovo administration would need to do an assessment of the situation before talks continued, stressing the need for the dialogue to be well prepared in order to avoid another failure.

“I do not want to hurry by using the words like ‘historic’, ‘comprehensive’ or ‘an agreement that will end all agreements,’” he said. “It is better to be more modest and realistic than to offer big words and short deadlines, which are then spectacular failures.”

Kurti seemed particularly keen to reopen discussions over missing persons, which Lajcak claimed had already made “full progress” during talks in September.

“If there is something that we need to discuss as soon as possible, even without preparing the future dialogue fully, it is the issue of missing persons,” Kurti said. “That does not wait and for this issue we need to engage seriously and honestly. We are aware that out of more than 1,600 persons one-third are not Albanians, and we do not want to differentiate on ethnic lines.”

Kurti added that Serbia has information that can help resolve questions over the fate of those still missing from the war and has a responsibility to share that with affected parties.

“The wounds of hundreds of families did not heal,” he said. “Serbia is responsible for revealing the truth about missing persons, and should sentence those responsible. This is a war crime, a genocide. In Belgrade they have the data and the archives.”

Kosovo’s new prime minister also discussed the need for financial reparations, another topic opened and repeatedly discussed between the Hoti administration and the Serbian delegation under the auspices of Lajcak. Kurti claimed that Serbia owes Kosovo around three billion euros in material and non-material damages, and that a succession agreement is required to resolve numerous property disputes.

The subject of the formation of the Association for Serb-Majority Municipalities, a topic which became a sticking point between the delegations in discussions in September 2020 was also raised.

Kurti stated that any organisation formed must be in line with the Constitution and cannot be monoethnic in character.

He added that Article 44 of the Kosovo Constitution provides the right to associate, adding that this provision means there is no need to negotiate the issue further.