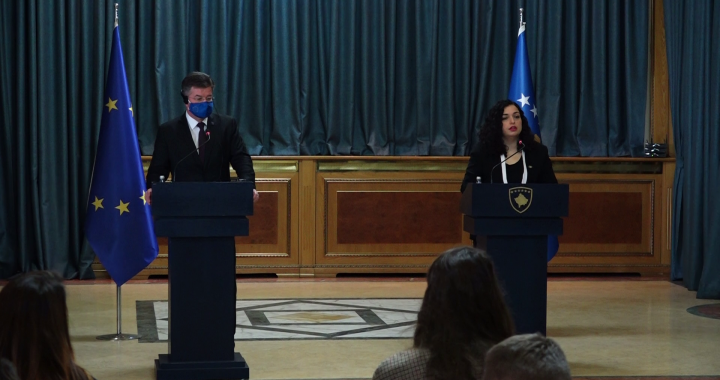 EU Special Representative for the dialogue Miroslav Lajcak has expressed his support for Vetevendosje’s governing priorities and stated that the dialogue would continue following meetings with Vjosa Osmani and Albin Kurti.

As part of a three day visit to Kosovo, EU Special Representative for the Kosovo-Serbia Dialogue Miroslav Lajcak held a press conference alongside acting Kosovo President Vjosa Osmani in Prishtina on Tuesday.

Lajcak stated that he had arrived in a “different Kosovo”, referencing the early results of February 14’s parliamentary elections, which he said had handed a “strong mandate” to Osmani and Albin Kurti, the leader of Vetevendosje, who currently sit on around 48 percent of the vote.

Questions have arisen in recent days about Vetevendosje’s commitment to the EU-facilitated dialogue with Kurti, after Kurti stated that it was not among his top priorities. Following a meeting with Lajcak on Monday night Kurti reaffirmed that the dialogue could not be either of the party’s top two priorities, which he identified as justice and employment.

However, on Tuesday, Lajcak expressed his support for these priorities stating that these were also values of the EU. He added that the conclusion of his meetings with Kurti and Osmani was that the dialogue will continue.

“I had a very long and detailed discussion with Mr. Kurti and Madame President Vjosa Osmani about where we stand in dialogue and what has been achieved, particularly since its resumption in July, and what are the next steps as we foresee them,” Lajcak said.

The EU representative added that he wants to proceed with the dialogue as quickly as possible in order to reach a swift conclusion. “I have said in the past and I want to repeat: this process can be completed within several months,” he said “We definitely don’t need another 10 years, nor 5, not even three, if there is commitment, if there is willingness of the parties.”

Lajcak also reconfirmed that cooperation between the EU and the US was now “as close as it could be” following the election of Joe Biden as President, and that both parties “expect the continuation of the dialogue.” Following a meeting with Lajcak on Monday night, US ambassador to Kosovo Philip Kosnett also “reaffirmed U.S. support for a collaborative, EU-led dialogue process.”

Osmani meanwhile, stated that a new chapter in Kosovo-Serbia relations should begin, and that Kosovo must take a different approach to the dialogue. “This new approach means that we will in no way accept discussing issues relating to borders, sovereignty and the constitutional order of Kosovo – these negotiations finished in February 2008,” she said.