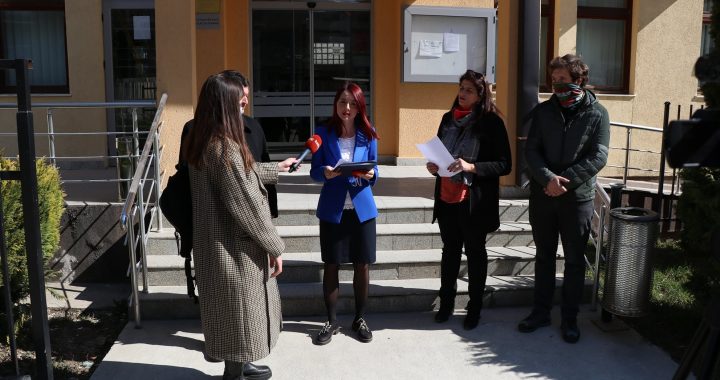 Over 70 non-governmental organizations have expressed support for environmental activist Shpresa Loshaj and asked the Austrian hydropower company to withdraw a lawsuit seeking 100,000 euros in damages.

On Tuesday, legal representatives of environmental activist Shpresa Loshaj submitted a response to the Basic Court of Decan regarding the lawsuit filed against her by Austrian hydropower company KelKos, who are seeking 100,000 euros in damages.

Appearing outside the court, Mexhide Demolli-Nimani of the Levizja Fol NGO expressed solidarity with Loshaj, stating that she was representing the voice of an ad-hoc coalition of more than 75 civil society organisations and activists.

She pointed out that it is the second time civil society representatives are standing outside the court in Decan to support environmental activists, citing the case of Adriatik Gacaferri who KelKos filed a lawsuit against in July 2020.

Demolli-Nimani identified both cases as SLAPP suits, or a strategic lawsuit against public participation, and expressed her concern at the rising number of these suits against both activists and journalists in Kosovo. “We believe that if SLAPP suits are successful in the court it would comprise a threat to democracy and the right of expression,” she added.

In a letter of support to Loshaj signed by all 75 organisations and activists (including BIRN Kosovo), it is stated that activists and journalists “should not be discouraged by these lawsuits.” The ad-hoc coalition also pledges that it will “continue to commit and provide practical support and assistance to all victims of SLAPP lawsuits.”

At Tuesday’s press conference in Decan, Loshaj’s lawyer Rina Kika revealed that, alongside the 100,000 euros in damages, KelKos are also seeking a public apology from Loshaj, and to refrain from making future statements about the company.

Kika argued that statements made by Loshaj about KelKos operating without an environmental permit and causing damage to the environment in Decan were based on facts and should be protected under Article 40 of the Kosovo Constitution.

She called on the Basic Court to dismiss the lawsuit as unfounded, citing several reports by Kosovo’s Energy Regulatory Office which reveal that licenses had not been issued to hydropower plants operated by Kelkos.

Adem Lushaj, an environmental activist from Decan, read out a letter from Loshaj, in which she thanked citizens, activists and members of Kosovo diaspora for their solidarity, and pledged that no lawsuit can halt her activism.

“I want to assure you that these attempts to mute do not bother us but just have boosted our determination and united us to defend our democracy,” the letter states. “We will not stop.”