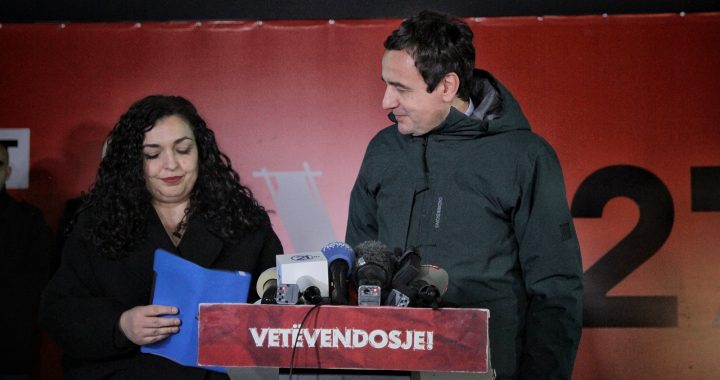 Vetevendosje on course for landslide victory

Vetevendosje leader Albin Kurti described early election results placing his party on around 48 percent of the vote as a triumph for the people, while PDK and LDK both conceded defeat late on Sunday night.

Vetevendosje are set to record an historic victory in the February 14 parliamentary elections, with the party having won 47.97 percent of counted votes with more than 85 percent of polling stations processed.

Party leader Albin Kurti described the result as unprecedented, and thanked his opponents for a free and fair election. “It became clear that this election was a referendum, and this referendum on justice and employment has been won,” he said. “Tomorrow is a new day. The road ahead is long, but our goal is good and noble, and I will be open.”

Appearing alongside Kurti, acting president Vjosa Osmani, who ran as a candidate for MP within Vetevendosje, said that Kosovo had voted for a bright future.

“We all waited a long time for this change,” she said. “We are aware of the burden that we will have due to the trust that was put in us. This government will be your government and your voice will be our voice.”

Early results suggest PDK are likely to end up in a distant second place with the party on around 17 percent on Sunday night, an improvement on its third place finish in October 2019’s election but with a smaller vote share.

Acting party leader Enver Hoxhaj stated that PDK would not seek to govern in coalition with Vetevendosje, but congratulated the party on its result, hailing the electoral process.

“Once more it was confirmed that Kosovo is a consolidated democracy and today’s process showed that we are an example for the region,” he said. “Kosovo needs stability and we pledge as PDK to be an element for stability. We will do the utmost to maintain the good functioning of the assembly.”

“Mr. Hoti has done an excellent job as prime minister and during the electoral campaign,” Mustafa said, adding that LDK would work hard to rebuild a vision for the country in keeping with the vision of the party’s founder Ibrahim Rugova.

At a press conference later on Sunday night, Hoti thanked citizens for voting and took responsibility for LDK’s poor performance. “The results are different to what we expected. I want to express clearly: I take responsibility,” he said. “I am always grateful for the opportunity given by LDK to serve the citizens of Kosovo, and LDK will be a constructive opposition.”

AAK’s results appear to be a slight improvement on predictions based on early exit polls, with the party currently sitting on around 7.5 percent of the vote. However, NISMA looks almost certain to fall short of the 5 percent threshold for parliamentary representation, with the party languishing on 2.75 percent.

Srpska Lista leader Goran Rakic claimed early in the night that his party had won all 10 seats reserved for Kosovo Serbs. Elections in the four northernmost majority-Serb municipalities were marked by extraordinarily high turnout rates, with Leposavic, Zubin Potok and Zvecan all seeing an over 80 percent turnout. Meanwhile, in North Mitrovica, an election commissioner told BIRN that she had witnessed citizens voting multiple times.

Overall turnout for the election is reported to have reached just over 47 percent, with more than 843,000 votes cast at the ballot box on Sunday.

In addition to the votes cast at the polling stations on Sunday, ballots received via post from voters registering from abroad are likely to have an impact on the final results, with the verification process expected to begin on Monday evening. According to the Germin NGO, over 43,000 packages of votes were received by the CEC by the deadline at midnight on February 12.