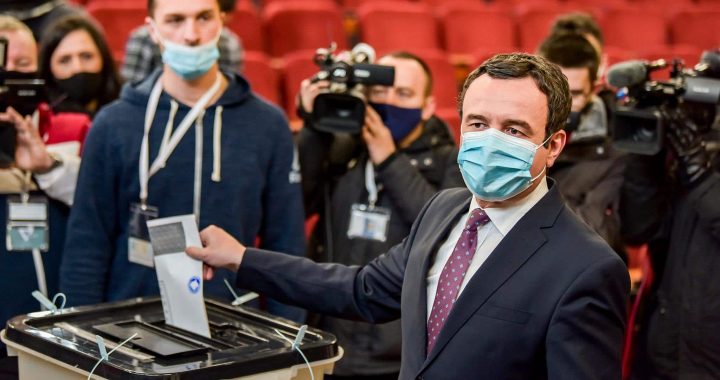 Three exit polls released as voting closed in Sunday’s parliamentary election put Vetevendosje in first place with between 42 and 53 percent of the vote.

As voting closed at 7 p.m. in Sunday’s parliamentary election, a series of exit polls predicted pre-election favourites Vetevendosje to take first place, with between 41.8 and 53 percent of the vote. PDK are widely predicted to finish second on between 16.5 and 20 percent, with LDK predicted to come in third on between 14.6 and 17 percent.

A poll published by RTV Dukagjini conducted by UBO Consulting puts Vetevendosje on 47.9 percent, with PDK second on 17.7  percent, and LDK third on 14.6. AAK is predicted to pass the threshold on 6.6 percent, while NISMA look likely to miss out on 2.7 percent.

Another exit poll of 2,500 people across Kosovo published by Kanal 10 and Albanian Post and conducted by the Gani Bobi Institute put Vetevendosje on 53 percent. PDK were predicted to finish second on 20 percent and LDK third on 17 percent. AAK were predicted to pass the threshold with 7 percent, while NISMA were predicted to miss out with 2 percent.

Ballots sent by post from voters registered from abroad were not included in the polls, and the verification process for postal votes is not expected to start until Monday evening. According to Baton Haxhiu, the founder of Albanian Post, the effects of voters from abroad may change percentages by up to 2-3 points.

Turnout in the election had reached over 37 percent by 4 p.m., according to Democracy in Action, a coalition of NGOs monitoring the election.

However, the day did not pass without incident. The adverse weather conditions made access to polling stations difficult for some citizens, with BIRN’s team on the ground reporting roads blocked by snow.

Irregularities were also reported in Kosovo’s Serb-majority municipalities in the north of the country. Sara Xhaka, LDK’s election commissioner in North Mitrovica told BIRN that she had seen citizens voting multiple times.