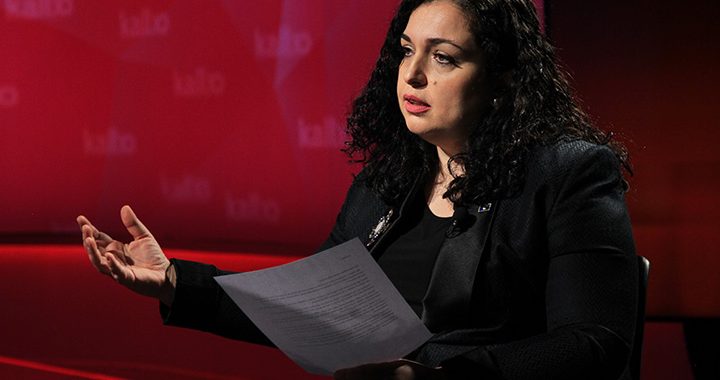 In an interview for BIRN, Vjosa Osmani outlined her ambitions for presidency and revealed that she has raised concerns with Kosovo’s international partners regarding Serbian interference in the most recent parliamentary elections.

In an interview for BIRN on Thursday night, acting president Vjosa Osmani revealed that she has raised concerns with Kosovo’s international partners regarding Serbian interference in the parliamentary elections on February 14.

She referenced the large numbers of votes for Kosovo’s non-Serb ethnic minority parties in Serb-majority municipalities, stating that she believes that losing parties in these elections will appeal to the Election Complaints and Appeals Panel and the Supreme Court.

“Unfortunately, the interference cannot be reduced only to Srpska Lista,” Osmani said. “This is direct interference by Vucic, and interference by one state in the electoral process of another state, in this case the Republic of Kosovo, is forbidden by international law.”

BIRN’s Jeta Xharra also enquired about Osmani’s own political future following the election. Xharra reminded the acting president that she stated that she may be open to a return to her former party, the Democratic League of Kosovo, LDK, should Isa Mustafa resign as party leader.

Despite Mustafa’s resignation following LDK’s disastrous election results, Osmani stated that her future lies in representing her voters from the office of the president. “The Kosovo citizens have defined my path and I will not deviate from that path – the LDK has chosen another path,” she said. “I will represent all of them as Kosovo president and there is no going back on that.”

However, Osmani’s route to the presidency is still unclear. Even if a parliamentary majority is reached to elect her, 80 MPs must be present in the parliament at the time of the vote for quorum to be achieved.

This constitutional stipulation has led to speculation that opposition parties may boycott the vote for an unwanted candidate and trigger yet more early elections, but Osmani believes that Kosovo’s entire political spectrum is currently averse to any further instability.

“For the sake of political stability and particularly during this pandemic and the economic devastation caused it, all [MPs] should contribute,” she said.

Osmani outlined her three main objectives if she is to be the next president of Kosovo: improving Kosovo’s image on the international stage, the vetting process in the judiciary and supporting marginalised groups in Kosovo.

“Kosovo’s image has been damaged a lot on the international stage since 2010, and this will be one of my primary focuses as Kosovo president,” she said. “Kosovo should be represented by its people, especially its brilliant youth, which has achieved extraordinary success in many fields.”

Osmani added that if anyone had failed to notice how much Kosovo’s image has improved in the two months of her acting presidency then they “were not paying attention.”

Regarding the dialogue, she said that as president she would cooperate fully with Kosovo’s next prime minister, widely expected to be Vetevendosje leader Albin Kurti. “It might be the first time when the prime minister and president will have full cooperation over this issue,” she said.

During the election campaign, Osmani appeared at a number of Vetevendosje rallies, several of which were subject to fines for breaking measures designed to prevent the spread of COVID-19.

However, the acting president defended herself against accusations that the recent rise in coronavirus cases may be attributed to these large scale public gatherings. She argued that Vetevendosje only held rallies outdoors, which were not scheduled or planned to gather large numbers of people.

In regard to vaccines against COVID-19, Osmani stated that, following discussions with international partners, she believes the first contingent would arrive in Kosovo in the first week of March through the World Health Organisation’s COVAX programme.

The acting president added that she could not state the exact number of vaccines that will arrive at that time, but that they would be designated to people in high-risk categories, including health care workers and the elderly.