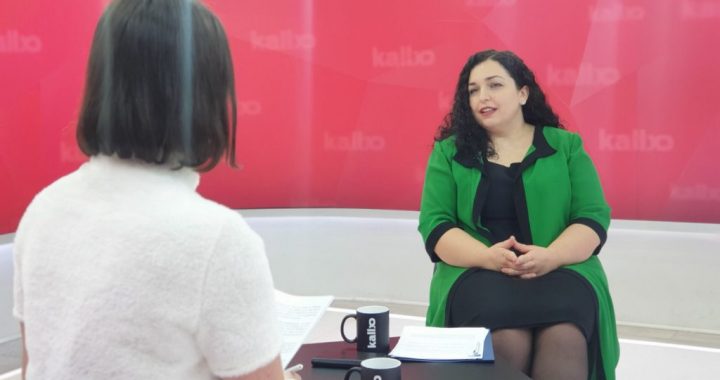 In an exclusive interview for BIRN, acting president Vjosa Osmani discussed her new citizens initiative, her relationship with Vetevendosje and the future of Kosovo-US ties under the Biden administration.

In an interview with BIRN’s Jeta Xharra on Monday, Kosovo’s acting president Vjosa Osmani elaborated on her political future, following her split from the Democratic League of Kosovo, LDK, in June.

The former LDK prime ministerial candidate told Xharra that she will run in the upcoming elections as part of what she describes as a citizens initiative. “Our aim was not to build a political party but a citizens initiative, which will put Kosovo citizens at the centre,” she said.

The initiative is yet to be named but has already unveiled its campaign slogan: “GUXO” (“to dare”). Explaining the slogan, Osmani told Xharra that the state of Kosovo itself is a result of political daring, adding that “the basic trait that everyone needs in politics is courage.”

The acting president also revealed that she is still yet to receive a full decision from the Constitutional Court that would give her the legal basis to declare Kosovo’s next parliamentary elections. Osmani met with leaders of political parties in late December following the court’s announcement of its annulment of the election of the Hoti Government, and has stated that the date of the election will be set immediately after receiving the full decision.

In terms of collaboration with other parties in the upcoming elections, Osmani revealed that the only party leader she has met with thus far is Albin Kurti of Vetevendosje. “We meet from time to time,” she said. “But so far we have only discussed a willingness to cooperate, to discuss topics, priorities.”

Osmani underlined that she and Vetevendosje have different ideological roots, but that this does not necessarily preclude cooperation. “It is important to emphasize that I still believe in the political values of the centre-right,” she said. “However this is not the end of the world and there are many democratic countries where centre-right and centre-left can work together, Germany for example.”

Osmani also did not completely rule out a return to LDK in the future, though added that a complete regime change is required within the party. “Let the presidency of LDK leave, and then we can talk about the possibility of returning,” she said.

Addressing Kosovo-US relations, Osmani spoke of the need to sit down with the new Biden administration and review the agreement signed in September under the presidency of Donald Trump.

“We need to talk to the Biden team to see what they think about those issues, which were reached as pledges not agreements,” she said. “Certainly it is important that US companies invest here, but there are questions over issues such as the Ujmani [lake] for which we need to see what Biden’s position is.”

The acting president added that she had an open mind about the longevity of the agreement and its impacts. “I am not prejudiced,” Osmani said. “I am not one of those who think that the new administration will just throw the agreement in the bin.”

She also believes that Kosovo should have an ally in Biden in regard to the implementation of the Association of Serb-majority Municipalities, principles for which were agreed in 2015 but were later declared contrary to the spirit of the Kosovo Constitution by the Constitutional Court.

“Kosovo as an independent and functional state is not only a project of the Kosovo people, but also an American project, and I am convinced that [the Biden administration] is committed to maintaining a functional Kosovo,” she said.

“With the agreement signed in 2015, Kosovo does not remain functional,” Osmani added. “So, what we will do is to try and convince them that [the agreement] is harmful for our joint project, and that anything that happens has to be in full accordance with the Kosovo constitution.”