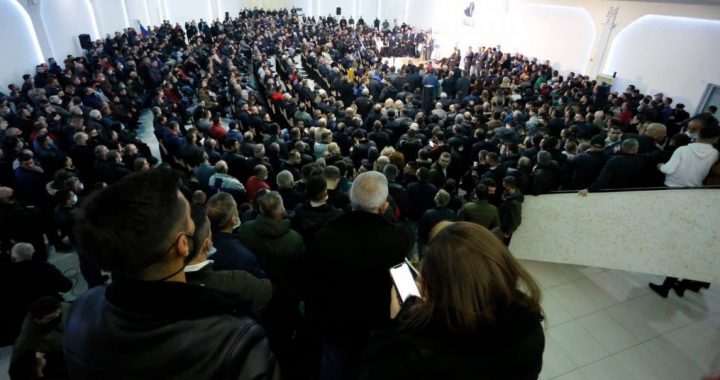 The Ombudsperson Institution has criticised Kosovo’s political parties for organising mass gatherings as part of the election campaign, with health experts warning of the consequences that could follow in the coming weeks.

The Kosovo Ombudsperson Institution has criticised the “selective” enforcement of measures to prevent the spread of COVID-19, pointing to large public gatherings organised by the country’s political parties as part of the ongoing election campaign.

On January 15, the incumbent government updated COVID-19 measures, limiting the number of people permitted to gather in outdoor public spaces to 50, and within enclosed spaces to 30.

“This is a double standard that can not be tolerated and violates the equality of citizens before the law,” the institution stated, expressing its concern over the endangering of lives due to non-compliance with these measures.

Last week the British Embassy in Prishtina also criticised the number of large-scale gatherings being organised without social distancing measures during the election campaign. “We urge all parties and their supporters to abide by Covid restrictions now that the official campaign period has begun,” the Embassy tweeted.

On Monday, photos of rallies held by the Democratic League of Kosovo, LDK, in Podujevo and Lipjan were published, revealing halls filled with people, as well as an absence of masks and social distancing measures. Minister of Health Armend Zemaj also published a number of photos from the rally in Podujevo to his Facebook account in which he is pictured with attendees not wearing masks.

On the same day, a fine of 2,000 euros was issued to Vetevendosje following a rally in the Metush Krasniqi square in Kamenica, which according to the inspectorate’s report was attended by around 500 people.

An official from the Municipality of Kamenica told BIRN that the inspectorate also issued fines to both the Alliance for the Future of Kosovo, AAK, and the Democratic Party of Kosovo, PDK on February 5 after the parties rallies in enclosed spaces that violated COVID-19 measures. According to the inspectorate, AAK’s rally hosted around 200 people, while PDK’s was closer to 300, ten times the permitted number.

Valbon Krasniqi, the newly appointed head of the Hospital and University Clinical Service of Kosovo, told Prishtina Insight that any large scale gathering risks increasing the number of COVID-19 cases.

“We overcame two phases of COVID-19, and we hope not to deal with a third wave,” he said. “Currently, the situation is stable as we have around 500 patients in Kosovo’s hospitals but any gathering of people risks public health.”

Hana Xhemajli, an independent researcher on health policies, stated that political parties were showing a complete lack of responsibility and that their actions could have ramifications. “This behaviour can result in an increase of infections in the coming weeks, and a potential new lockdown is a real possibility,” she told Prishtina Insight.

The researcher added that by organising such large gatherings, Kosovo’s political parties were conveying a message that equality before the law does not apply to them and that votes are worth more than public health.