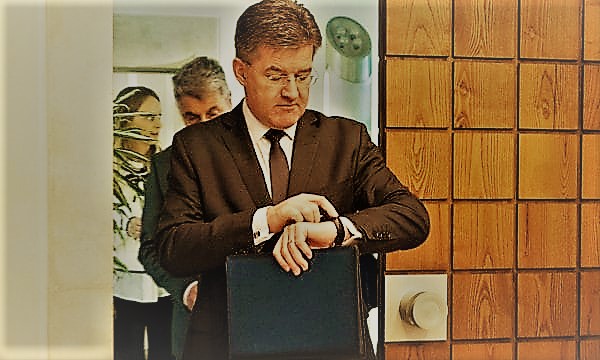 The new special envoy for the Kosovo-Serbia dialogue has been given little time to restore faith in the EU’s ability to normalise relations between the two states, especially when facing a global pandemic, political crises and pressure from the other side of the Atlantic.

On April 3, the EU officially appointed Miroslav Lajcak as Special Envoy for the Kosovo-Serbia dialogue and other Western Balkan issues. Lajcak, who previously served as the Foreign Minister of Slovakia, was proposed by the EU foreign policy chief, Josep Borell, who upon starting his mandate noted that Kosovo-Serbia relations will be one of his top priorities.

A spokesperson for the EU’s foreign policy unit told a press conference on Monday that Lajcak will begin consultations on the dialogue this week. He will have to move fast. Lajcak has been given an initial mandate of twelve months to achieve his task of “comprehensive normalisation of the relations between Kosovo and Serbia.”

This time frame seems ambitious. If the EU was not able to achieve normalisation over the course of ten years, how realistic is it to believe a final agreement could be reached in just one? That humanity is facing a global pandemic casts even more doubt on such an optimistic timeline, with many countries having closed their borders for fear of further spreading the virus.

The pandemic has also created political uncertainty across the globe, including in Kosovo and Serbia.

The Kosovo Government was dismissed last month following a vote of no confidence. With elections impossible, negotiations towards forming a new government are underway, but already seem to have hit something of a stalemate, with Vetevendosje reluctant to provide a candidate to mandate the next government. Acting Prime Minister and Vetevendosje leader Albin Kurti has said that a candidate will be provided “in time.”

Serbian elections scheduled for April have also been postponed as a result of the pandemic, and it could take months for both countries to have a legitimate government in place.

The EU did not deliver, the US filled the vacuum

Lajcak also faces a shifting geopolitical landscape, with Euro-Atlantic perspectives seemingly splintering in recent weeks as the EU and the US compete to play the role of peacemaker.

EU-facilitated negotiations between Kosovo and Serbia have been taking place for ten years without reaching a final comprehensive agreement. In fact, the talks have been suspended entirely since November 2018, following the previous Kosovo Government’s decision to impose a 100 per cent customs tariff on Serbian products.

Prior to the suspension, alleged secret negotiations involving an exchange of territories between Thaci, Serbian President Aleksandar Vucic and Borrell’s predecessor Federica Mogherini tarred the EU’s reputation in Kosovo – as have a string of broken promises on visa liberalisation.

Following Kosovo’s declaration of independence, the US largely disengaged from the region, allowing the EU to handle relations between Kosovo and Serbia.

However, in 2019 the Trump administration appointed two new diplomats – Special Representative for the Western Balkans Matthew Palmer and Special Envoy to the Kosovo-Serbia Dialogue Richard Grenell – who have changed the state of play.

Grenell set the wheels in motion in January by claiming to have facilitated a direct flight agreement between Kosovo and Serbia. While the so-called agreement appears to be little more than non-binding letters of interest, the meeting, which took place at the US Embassy in Berlin where Grenell serves as US Ambassador, generated a flurry of media attention, and excluded EU representatives.

Trump’s new envoys are trying to send the message that they can get things done in the region, and while the US has always been supportive of the EU-facilitated dialogue, there has been no declaration from US officials congratulating Lajcak on his new role.

The two global superpowers’ current administrations seem to have different priorities for the dialogue. While the EU wants to pursue a final deal that avoids creating other political implications in the region, the US seems to be focusing on quick results in time for November’s presidential elections.

Lajcak’s appointment has not been well received in Kosovo. Upon news of his appointment, former prime minister Ramush Haradinaj stated that the “EU is stalling the Dialogue,” while President Thaci bluntly labelled Lajcak as “the wrong choice” when rumours of his appointment circulated in early March.

The acting Kosovo Government has also expressed scepticism that the two EU officials most involved in the dialogue, Borrell and Lajcak, are both from countries that do not recognise Kosovo. However, the acting government has also stated that the most important aspect of the dialogue is that it has clear principles and aims for a sustainable agreement between Kosovo and Serbia as two independent and sovereign states.

Thaci and Haradinaj meanwhile have stated that the Americans have “a leading role” in the dialogue and clearly believe that the chances of reaching a final agreement with Serbia are higher with the Americans rather than the Europeans. The problem with this mindset is that it has opened a divisive debate in Kosovo over support for the EU and the US.

In order to have an effective approach to the dialogue, Lajcak must first re-establish the EU’s faded credibility in Kosovo. Official visits to both Serbia and Kosovo to meet prominent figures from the media and civil society are essential, and there must be a clear departure from Mogherini’s strategy of negotiating behind closed doors to ensure transparency throughout the process.

To increase the legitimacy of the EU, Lajcak needs to focus on local priorities. According to a recent survey conducted by the Democracy for Development Institute in Kosovo, Kosovo citizens said that visa liberalisation should be the country’s main foreign policy priority.

If Lajcak wants to be perceived as a credible envoy, he must convince the EU to deliver on its promise to lift restrictions on Kosovo passport holders, a promise that was recommended by the European Commission more than two years ago.

Lajcak must also be very clear when he delivers political statements on the dialogue, that he represents the EU and not his member state. Citizens already fear that Lajcak will not be a neutral arbiter because Slovakia has not recognised Kosovo and voted against Kosovo’s bid to join UNESCO.

Finally, both Lajcak and the EU must be vocal against the idea of an exchange of territory, as the vast majority of Kosovo citizens, both Albanians and Serbs, reject this idea.

In order for relations between Kosovo and Serbia to be normalised, there are numerous barriers to overcome, including trade issues, land disputes, Serbia’s ongoing de-recognition campaign and the deep-rooted tension that arises from Serbia’s lack of sympathy or remorse for the crimes of the Kosovo war.

The prospect of reaching a comprehensive agreement between Kosovo and Serbia this year is minimal. Even in the best case scenario, if the pandemic is over and elections in both countries are successfully held and new governments are formed quickly, no legitimate negotiations can likely take place before September.

Whether it is before American elections in November or the end of Lajcak’s mandate 12 months from now, no deal struck within a year can be a good deal for Kosovo.