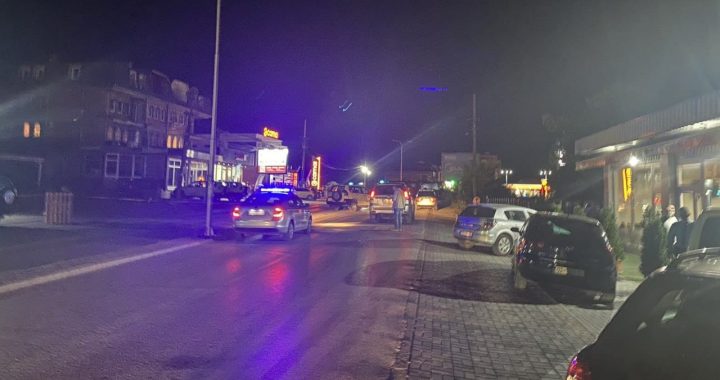 Kosovo police patrol at the scene where a double murder occurred in Peje/Pec on September 8, 2021. Photo: BIRN

Politicians including the PM have condemned the double slaying in Peje/Pec on Wednesday night – one of whose victims was a candidate for mayor of the town in the October local elections.

Kosovo was shocked on Wednesday when Astrit Ademaj, a candidate to be mayor of Peje/Pec from the opposition Democratic Party of Kosovo, PDK, and a former mayoral candidate from the same party for Decan/Decani municipality, Blerand Kadrijaj, were killed in an armed incident at around 8.15pm.

Kadrijaj ran to be Decan/Decani mayor in the 2017 local elections.

A brother of one of the victims was also wounded and sent to hospital, where he has been arrested as a possible suspect.

Shkodran Nikci, spokesperson of the Peje/Pec Prosecution, told BIRN that two firearms and several bullet shells were seized at the scene.

The killings, which do not seem directly related to local elections due on October 17, have been widely condemned, and political leaders have also sent condolences to families of the victims.

There are unconfirmed reports that the two victims shot at each other. BIRN could not independently confirm these claims.

On Facebook, Prime Minister Albin Kurti called on all relevant institutions to investigate the case “with the highest seriousness” and shed light on it “as soon as possible”.

In a statement, the PDK said it was shocked by the tragic news and expressed condolences to the families of the victims.

“In these difficult moments, we sympathize with the pain of the families and pray for them to fnd the courage for their huge loss,” the PDK said. It has suspended all electoral activities planned for Thursday.