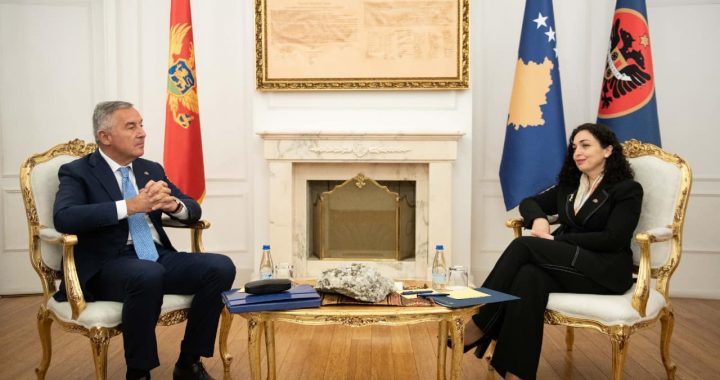 During his visit to Kosovo, President Milo Djukanovic said conditions will be created for possible corrections to the disputed border demarcation agreement.

Demarcation of Kosovo’s border with Montenegro returned to the agenda this week with Montenegrin President Milo Djukanovic’s visit to Kosovo on Wednesday.

At a joint press conference, Kosovo President Vjosa Osmani and her Montenegrin counterpart both referred to demarcation.

Osmani said everything related to relations between the two countries would be discussed and developed under the principle of mutual respect, recalling that the Kosovo parliament had ratified three documents related to demarcation.

“Regarding demarcation, Kosovo has ratified three documents in its Assembly. The first was the bilateral agreement on demarcation of the border, the second was the joint statement between the two presidents and the third was the report of the commission. Everything to do with our relations will be discussed and developed under the principle of mutual respect,” she said.

“The issue of the joint technical body foreseen in the declaration of the [two] presidents is a technical issue that will be realized through friendly and substantive discussions,” added Osmani.

She continued that Kosovo and Montenegro should never allow relations between them to be damaged.

The joint statement between the former presidents of Kosovo and Montenegro, Hashim Thaci and Filip Vujanovic, adopted four years ago, envisioned ratification of the demarcation agreement and also the possibility of amending it.

A statement published in February 2018 stated that, after ratification of the agreement, a joint working body would be formed for demarcation of the border line.

One month later, the Kosovo parliament ratified the Demarcation Agreement, which was among the conditions set for visa liberalization by the EU – which has not yet happened.

Djukanovic said they respect the signed documents, but added that through the work of the joint demarcation commission, conditions for possible corrections will be created.

“I am very confident that we will adhere to the documents we have signed and that through the work of the joint demarcation commission we will create the necessary conditions for corrections that we agree on … it should not serve as a source of disagreement and endanger our relations,” he said.

But, unlike the President, days ago, the new Prime Minister of Montenegro, Dritan Abazovic, has said the demarcation process between Montenegro and Kosovo has ended.

Abazovic was responding to a request of the Prime Minister of Kosovo, Albin Kurti, for a review of the demarcation.

“I do not see that possibility, nor does anyone in Montenegro treat it as a problem. For Montenegro, it [the agreement] was a closed issue the moment it was signed,” Abazovic said shortly after being elected prime minister.

Kurti on March 21, marking the fourth anniversary of ratification of the deal by Kosovo’s parliament, told the media that he was waiting for a new Montenegrin government to be formed before raising the issue.

“We hope there will be new circumstances with a new [Montenegrin] government to address this issue,” Kurti said.

Kosovo and Montenegro started consultations on signing an agreement on demarcating their 79-kilometer border in 2012. An agreement was signed in Vienna in September 2015.

Montenegro’s parliament approved the deal in 2016, but in Kosovo, a vote on it was postponed several times due to a lack of support among MPs and disputes over two sites and pastures covering about 8,000 hectares.

An international ad-hoc commission appointed by former Kosovo President Atifete Jahjaga, in March 2016, headed by Fletcher Burton, a former US diplomat in Pristina, issued a report supported by Washington which supported the agreement reached by the two governments.

In July 2018, the two states formed a joint commission to mark the border. But in July 2021, the Montenegrin Interior Ministry said that not one meeting had taken place so far.

“The Commission had a meeting four years ago, and again in March 2020. Montenegro sent initiatives for the implementation of the Agreement so the state border could be marked,” the ministry said.

“We believe the Republic of Kosovo will contribute to the implementation of this agreement in the spirit of good neighborly relations and regional cooperation,” the ministry told BIRN.

Prishtina Insight has reported on the latest developments about the demarcation.