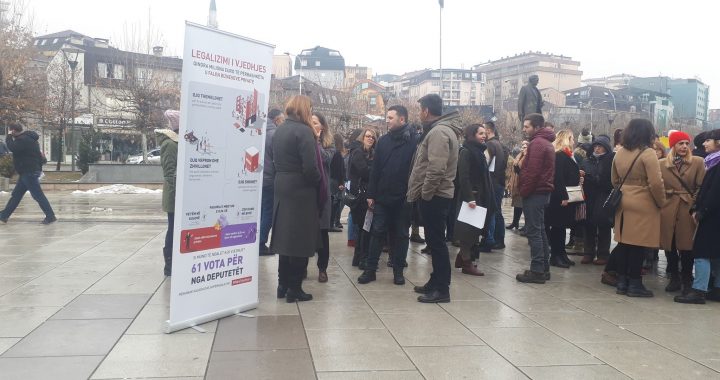 Members of NGO's protesting against the Law on Civil Society. | Photo: Egzon Dahsyla

Members of non-governmental organizations gathered in front of the Kosovo Assembly on Wednesday to protest against the voting of the Draft Law on Civil Society.

Non-governmental organizations demanded a ‘no’ vote against the draft Law on Civil Society on Wednesday, assembling in front of the parliament building in Prishtina as MPs prepared to vote.

The NGO members held up infographics for Kosovo MPs at the protest, illustrating that according the draft law as it stands, after an NGO shuts down, its wealth and assets will be privatized and transferred to other private businesses.

“The first in the world to donate public wealth for private pockets,” read banners held up by the protestors.

The original draft law passed at the first reading on November 7, 2018 at the Kosovo Assembly, but was returned to the Assembly at the request of civil society organizations.

The law is expected to be voted on by MPs on Wednesday at 16:00, following amendments proposed by the Office of the President, which would bring the law in line with civil society demands.

Taulant Hoxha from the Kosovar Civil Society Foundation, KCSF, stated that the law allows for the capital of civil society in Kosovo to be stolen.

“We are here in the name of 300 hundred non-governmental organizations to demand the prevention of theft of the capital and wealth of civil society in Kosovo,” said Hoxha.

According to Hoxha, Kosovo is the only country in Europe that would permit this kind of transfer in the event of an NGO’s dissolution.

The EU Office in Kosovo condemned the possibility of this provision passing as “concerning.”

“This would represent a fundamental breach of non-profit principles, and would open the door for corruption and misuse of donor funding,” the EU Office stated in a press release last Friday.