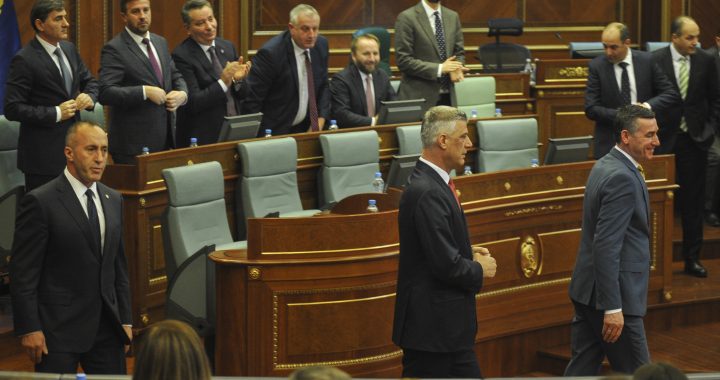 A Trojan horse sits at the government’s door

In the wake of a fresh battle between coalition partners this week, each seeks to undermine the other, and new elections are being called for - but this is nothing new in Kosovo’s political culture.

On Monday, it all came to a head.

The biggest partners in Kosovo’s ruling coalition, PDK and AAK, divided themselves on the issue of tariffs against Serbia. One the one hand, PDK official and head of the Kosovo Assembly, Kadri Veseli, proposed to suspend the 100 per cent customs tariff on goods coming from Serbia that was introduced by the Kosovo government in November 2018.

On the other hand, Prime Minister Ramush Haradinaj sent a letter to leaders of the US, UK, Germany, France and Italy, setting out the conditions required before the government would remove the tariff increase, setting out public confirmation that Serbia will discontinue their “campaign against Kosovo’s aspiration as a sovereign state” as one of the requirements.

“Kosovo needs neither confrontation with the US, nor with the European Union. Imposing conditions on our main strategic partners will not help Kosovo in defending its sovereignty and territorial integrity, or in its path towards euro-atlantic integration,” said Veseli after meeting the US ambassador to Kosovo, Philip Kosnett.

This recent rift between Veseli and Haradinaj illustrates the inability, or unwillingness, of Kosovo’s ruling coalition partners to take a unified position – and it is becoming less and less clear which side of this coalition are sitting inside the Trojan horse.

It is only in recent days that Veseli has come out against the continuation of the tax. Veseli and the deputy prime minister, Enver Hoxhaj, another PDK leading figure, took credit for the tax hike earlier in January, calling it their own “exclusive idea.”

Haradinaj, however, stood firm in support of continuing the imposition of the tariff in absence of Serbia’s change of stance towards Kosovo’s statehood.

The dwindling support for the tax imposition throughout PDK’s ranks in the last weeks, if not days, reinforces an in-party inconsistency and unstable political positioning first made fashionable by politicians such as the president himself, Hashim Thaci.

Mocking Haradinaj’s comment last week that the tax will be removed “when the snow melts,” Thaci posted on Sunday, “The snow has started to melt fast, I hope it will not become muddy.”

Haradinaj’s next letter, published on Tuesday morning, set out that, besides commitment to concluding a “legally binding agreement” with Serbia through this agreement, Kosovo has another goal to reach.

“Through this explanation and position, we seek an end to the Serbian propaganda that the status and territory of Kosovo is still on the table,” Haradinaj’s letter reads.

As the initiator of the concept of ‘territorial exchange’ between Kosovo and Serbia, Thaci is well framed by Haradinaj as the “Serbian propaganda” in question in this rebuttal.

Both Haradinaj and PDK leaders are using unscrupulous means to attack each other, yet they are supposed to be running the country together. While Thaci and his PDK colleagues are committed to “preserving” relations with international partners, Haradinaj is the super hero who will preserve every centimeter of Kosovo’s territory.

Although Thaci and Haradinaj’s enmity has a longer history, one should not forget that PDK and Haradinaj worked shoulder to shoulder when it came to forming a coalition and preserving their power.

Animosity from Thaci’s PDK is nothing new. Looking back to December 2017, when more than 40 MPs, mostly from PDK, initiated the vote to abolish the Hague-based Kosovo Specialist Chambers. It soon became clear the Kosovo’s president was the guiding force behind discrediting the court, using the thin veil of party political structure to advance his own position.

In August 2015, it was Thaci and PDK who fiercely fostered support for the vote on the Specialist Chambers, despite the constant backlash from opposition parties condemning the selective preliminary investigation into the crimes, primarily those allegedly committed by Kosovo Albanians during the Kosovo war.

When the Specialist Chambers began calling key PDK members for interviews in the Hague in December last year, the party released a statement, hailing the very court that they voted in favor of a “black cloud” for Kosovo.

It is incredulous that those who initiated the proposal to abolish the Specialist Chambers, a proposal which was met with outright rejection from the US and the EU, will now shift their position on the tax against Serbian imported products in the name of Kosovo’s partnership with these same countries.

PDK’s claims that the US alliance is being jeopardized by the tariff amounts to nothing more than scaremongering, that the ‘holy alliance’ between Kosovo and the US is coming to an end.

Both the US and EU have certainly made their position clear when it comes to improving bilateral relations between Kosovo and Serbia. Considering US foreign relations, it is difficult to be believe that the US is committed enough to the Serbian economy that it would break its relations with other countries.

Selling the US-Kosovo relations as on the verge of collapse, then, is simply unrealistic.

Neither the US nor the EU want to see any sort of escalation between Kosovo and Serbia, and it would be absurd to suggest that this would be the straw that breaks the camel’s back, marking the end to US-Kosovo relations.

This internal debate between the coalition unfolds at a time when Kosovo’s employees in the education sector are entering their third week of strikes in protest of low salaries, while another wave of protests and boycotts are just around the corner.

The Kosovo government’s clock might be ticking, and early elections may be on the horizon, the behavior of the ruling political parties in recent weeks reveals exactly how this clock ticks: using mistrust and mockery, but a readiness to cohabit when self-interest demands it.