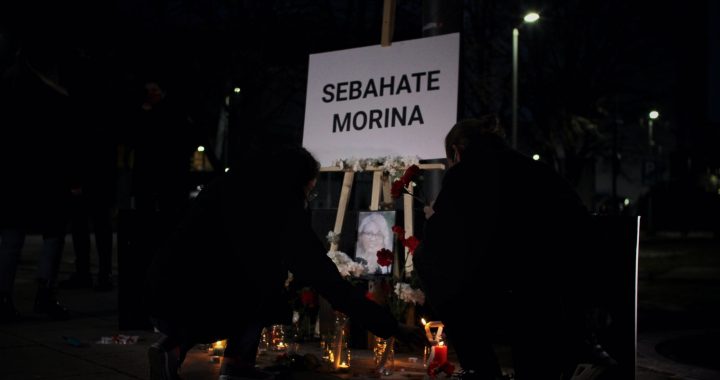 Dozens of Kosovo citizens joined protests and vigils in memory of the latest femicide victim in the country – a woman murdered by her ex-husband days after he was reported to the police for domestic abuse.

Dozens of Kosovo citizens on Thursday evening paid tribute in the capital Prishtina to Sebahate Morina, a woman killed several days ago by her ex-husband in the capital’s Kalabria neighbourhood.

Protesters held placards with the name of the victim and the inscription: “Not one more”.

A vigil with candles and flowers was also held in the city’s Skanderbeg square in front of the government building.

Morina was killed by her ex-husband, Lulzim Sopi, on March 14, 11 days after her daughter had reported her mother’s physical abuse to the police.

According to the NGOs the Kosovo Democratic Institute, KDI, and the Kosovo Womens Network, KWN, Morina ex husband had been reported for domestic violence in 2019 as well, when he was held in custody and the now deceased received police protection measure.

But Morina protection measures expired in December 2020, around three months before she was murdered.

A group of Collective Activists blamed the judicial institutions for the latest femicide in the country, which it said could have been prevented.

“The State Prosecutor reasoned that Sebahate did not express readiness to pursue the [law] case and refused to come for a second explanatory interview,” stated the activists, adding that the Prishtina Basic Prosecution was to blame for “failing to protect” her as well as for “blaming the victim … for not reporting the abuse herself”.

The vast majority of the victims of domestic violence in Kosovo are women; in 2020, six women were killed by their partners.

By mid-February 2021, the police had identified around 165 cases of domestic violence.