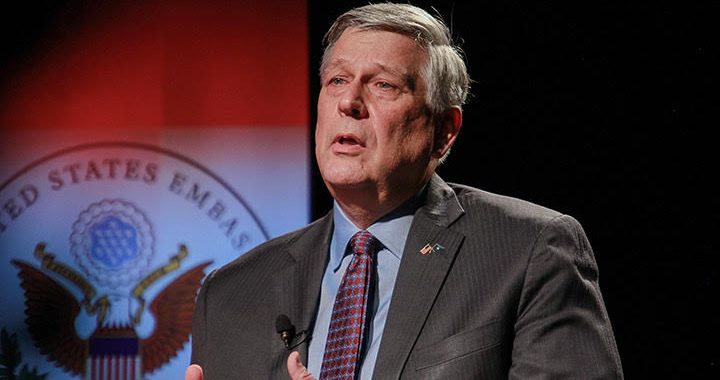 Outgoing US ambassador to Kosovo: ‘Relations are rock solid’’

Philip Kosnett told BIRN that parallels with Afghanistan are misplaced as Kosovo becomes less a US dependency and more a trusted partner.

Asked whether the conflict with Serbia can be improved only via the economy, not by addressing the past, Kosnett said: “You can never achieve true reconciliation by ignoring the past” – and the US position was not that only the economy mattered.

“What the previous administration was trying to emphasise, and this is still a policy of the Biden administration, is that stronger economic ties between Kosovo and its neighbours will improve the lives of the ordinary citizens,” he told BIRN’s TV show, Kallxo Pernime, on his last week of duty.

According to the ambassador, the former US Trump administration and Joe Biden’s current one have the same strategy towards Kosovo, even if it involves different approaches.

“The methods of the two governments, the two US administrations, have been quite different, but if you look at the overall US strategy, the overall US approach to Kosovo, it has not changed much,” Kosnett said.

A relationship evolving towards partnership

Addressing questions about parallels with Afghanistan, which US troops have left after 20 years of presence, amid sharp criticism, Kosnett said the US would not be leaving Kosovo.

“In the United States, and among our NATO allies, there is a strong support for keeping KFOR [the international peacekeeping force in Kosovo]. This is one aspect. However, KFOR is not only a gift for Kosovo. One of the first fields where the people in Serbia and Kosovo seem to agree on is that KFOR plays an important role in maintaining security and stability of the two countries,” he said.

Asked more directly about whether the US troops could pull out of Kosovo as they did from Afghanistan, Kosnett said that the two countries are very different, though lessons might be learnt from the latter.

One includes corruption, as the people of Afghanistan clearly did not consider that the US-backed government was working enough for the ordinary citizens. At the same time, he noted, Kosovo has through democratic elections chosen to make changes that would fight corruption.

Kosnett went on to say that the relationship between the two countries was stronger than ever, and was evolving towards partnership over what was once dependency. “Kosovo-US relations are are rock solid’,” the diplomat declared.

Kosnett was sworn in as fifth US ambassador to Kosovo in September 2018. Before being appointed to Kosovo by former President Trump, he was the Deputy Chief of Mission and subsequently chargé d’affaires in Ankara, Turkey, from 2016 to 2018.

Disagreements with Kurti brought coalition down

While Kosovo has seen a series of “free and fair elections”, he said, Kosnett conceded “the fact that the US administration and the [Albin] Kurti government had disagreements on some policy issues,” saying that these played a role “in breaking the LDK coalition with Vetevendosje”.

Kosnett was referring to the breakup of a former government coalition between current opposition Democratic League of Kosovo, LDK, and Kurti’s current ruling party, Vetevendosje, which led to a no confidence motion that overthrew the first Kurti-led government in March 2020.

This was largely attributed to Kurti’s disagreements with the former Trump Administration, especially with its former special envoy to the Kosovo-Serbia dialogue, Richard Grenell.

Kosovo’s parliament elected Kurti as Prime Minister for a second time in March 2021.

Unlike previous governments in Kosovo, Kurti has now formed a government without needing to include any other Kosovo Albanian parties after his Vetevendosje party won the February 14 snap elections by a landslide, giving him 58 of the 120 seats in parliament, almost half.

He only needed three more votes to have a majority of 61 and form a government, and found them through non-Albanian representatives in parliament.

Kosnett considers that both voters and party leaders in Kosovo have “played the long-term game” in accepting the result, saying that the opposition LDK and Democratic Party of Kosovo, PDK, which had constantly led the country since after the 1998-1999 Kosovo war, had accepted their defeat.

Speaking about the Washington agreement which Serbian President Aleksandar Vucic and former Kosovo PM Avdullah Hoti signed under Trump’s auspices in September 2020, Kosnett thinks strengthened economic ties between Kosovo and Serbia, but also with other countries in the region, “is vital for the future”.

Serbia and Kosovo signed two different documents, mainly concerning economic cooperation, rail and transit links, in Washington. One year since the agreement was signed, in Kosovo it is gathering dust, a recent BIRN fact-check concluded.

But, recalling that the deal predicted the joint engagement of Kosovo and Serbia in a local “mini-Schengen” initiative, now officially called “Open Balkan,” Kosnett says all the “West Balkan 6” countries should collaborate more closely in economic matters.

“Kosovo, Serbia, all neighbours in the Balkans, must sit down together and decide how they will continue to strengthen the regional economy,” he said. “Improving trade and investment in the region will bring jobs, creating economic opportunities for all.”

He noted that, while American investors are encouraged to invest in Kosovo, they still see business risks such as corruption, weak economic ties in the region and a lack of rule of law.

“Regarding this, there are positive signs in the Assembly [parliament] to create a commercial court,” Kosnett added, referring to a July vote in the Kosovo parliament on a draft law to create such a court.

Kosnett said he does not see Kosovo now as a US dependency, noting that, “in recent years we have seen how Kosovo is becoming more and more a partner and less dependent”.

As an example, he cites Kosovo’s robust fight against terrorism and its repatriation of citizens who joined ISIS in conflict zones in Syria. Up to now, Kosovo has repatriated over 250 citizens from Syria.

Kosnett also cites Kosovo’s partnership role in sheltering refugees who have fled Afghanistan, fearing they will suffer for their former collaboration with US and NATO forces.

Kosnett’s parting advice to his successor? Get out of the capital, Pristina, and get to know people from all over Kosovo.