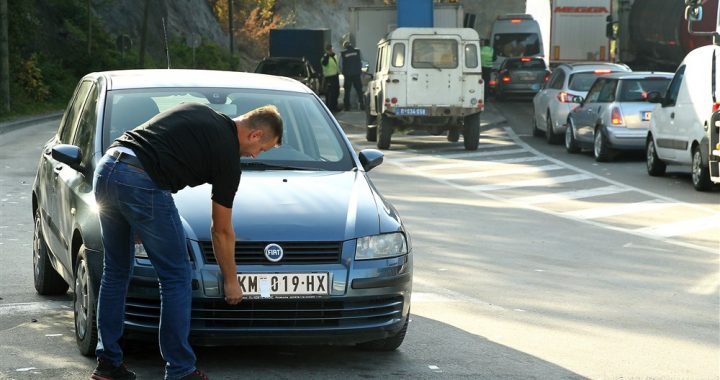 A motorist takes off stickers covering the national markings on his car license plates at the Jarinje border crossing between Kosovo and Serbia at Jarinje, Serbia, 01 November 2022. The Government of Kosovo will begin implementing a plan to eliminate the usage of Serbian car license plates. All owners of vehicles with Serbian number plates are warned and requested to visit any of the Vehicle Registration Centers and register their vehicles with RKS license plates. In the Serbian community of Kosovo, the RKS license plates are seen as unacceptable as they suggest the recognition of independence of the Republic of Kosovo. Photo: EPA-EFE/DJORDJE SAVIC

The Police Inspectorate has recommended the suspension of the director of the police in northern Kosovo after he declared that will not implement the government's decision to distribute reprimands to users of outlawed license plates.

On November 3, the Police Inspectorate of Kosovo, PIK recommended the suspension of the director of the police in northern municipalities, Nenad Gjuric, for committing “Sabotage” and for “calling for resistance” to government decisions.

Gjuric accepted the recommendation for suspension from the General Directorate of Police and handed out his official gun.

Gjuric on November 2 said that the police in the north of Kosovo will not implement the government’s decision to distribute reprimands to drivers of cars with license plates issued by Serbia.

“We cannot implement that decision because it is political and directed mainly against the Serbian community, to which we ourselves belong,” he said.

He added that traffic unit patrols from Pristina have been sent to the north, “to exert pressure”.

“In addition to a criminal investigation, administrative responsibility will also be considered. Therefore … suspension of the same has been recommended,” the PIK said.

Gjuric made his statements after meeting representatives of Serbian List, the main party of the Serbs in Kosovo, and the mayors of four mainly Serb municipalities in the north, North Mitrovica, Leposaviq, Zvecan and Zubin Potok.

He said that the General Directorate in Prishtina as well as all international actors were informed in advance of this decision.

The mayor of North Mitrovica, Millan Radojevic, thanked the commanders of the police stations from the north on behalf of the four mayors of the northern municipalities and said that they supported police officers who do not want to distribute reprimands.

Since November 1, the authorities in Kosovo have said that citizens who have cars with illegal license plates will receive reprimands.

This is the first phase of the three-stage plan, which the government has said it will implement from November 1 to April 21, 2023, regarding the re-registration of cars with “RKS” (Republic of Kosovo) license plates.

The second phase foresees a fine of 150 euros for drivers who have cars with Serbian license plates, while in the third phase trial license plates will be imposed.

After April 21, 2023, according to the government, the circulation of cars that do not have RKS license plates will not be allowed.

The decision to re-register the cars was originally scheduled to take effect on August 1, but was delayed for a month after local Serbs set up barricades to protest the decision.