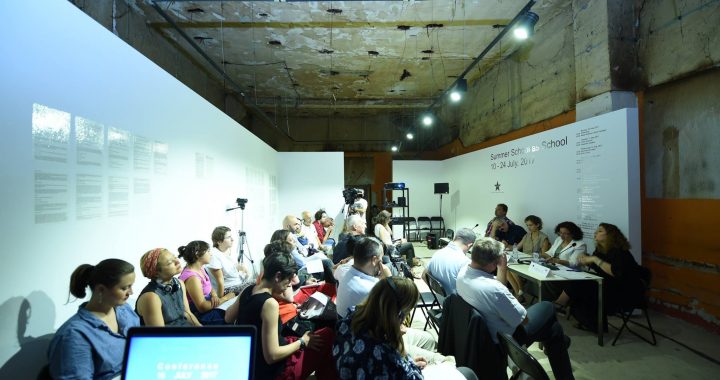 A presentation during Summer School as School in 2017. | Photo courtesy of Stacion.

A multitude of artists, writers and scholars from the Balkans and beyond will present in Prishtina as part of the public program of Stacion’s art summer school.

Philosophy and art buffs will have their hands full starting next week as Prishtina is about to host a series of talks and exhibitions as part of Stacion – Center for Contemporary Art’s summer school.

Starting from July 16 until August 2, Stacion is organizing the fourth edition of ‘Summer School as School,’ an interdisciplinary set of courses lectured by artists, philosophers and other academics. More importantly, the courses will run alongside a public program which includes a series of exhibitions and lectures by well-established philosophers, curators, and artists.

The public program contains presentations by local and international lecturers of the school, as well as artistic performances, film screenings, exhibitions and music events.

Albert Heta, director of Stacion, explained that the public program serves as an intervention to the courses, offering an interdisciplinary experience to non-participants.

“As a model it tries to create an opportunity of opening up certain fields that are studied within the courses,” he said.

The public program will kick-off  on July 16 with a presentation by Slovenian philosopher Mladen Dolar, one of the co-founders of the Society for Theoretical Psychoanalysis alongside Slavoj Zizek and Rastko Mocnik.

Other presentations include the German artist Felix Gmelin on July 26 and American writer and curator Carolyn Christov-Bakargiev the former art director of the renown dOCUMENTA exhibition on August 1. Another philosophy heavyweight, the Slovenian philosopher Alenka Zupancic, will also hold a lecture on August 1.

In addition to the presentations, Stacion will organize three exhibitions in various locations.

The first, Videoing by Jakup Ferri, will open on July 16 at 9:00 pm at Kino Armata. One of the well-established Albanian visual artists working today, Anri Sala will also present at the Boxing Club on July 17 and show his intervention If and only if at the same location on July 18 at 8:00 pm.

Participants and the general public will also be able to visit the Museum of American Art in Prishtina at Stacion, a project dedicated to assembling, preserving and exhibiting memories primarily on the Museum of Modern Art in New York.

This year’s program will also have two presentations on the Yugoslav Black Wave, an experimental film movement in former Yugoslavia.

“We are going to explore artistic movies that are created outside of a [certain] industry. We are interested in looking into practices that are not impacted directly from the market. This is important, because we think that these [works] contain important social content that does not fit with the market,” Heta said.

The Black Wave movies Nevinost bez zastite (Innocence Unprotected) and Kad budem mrtav i beo (When I am Dead and Gone) will be screened at Kino Armata on July 21 and July 28 respectively, preceded by presentations and followed by DJ sessions from theorist and cultural critic Sezgin Boynik and writer and researcher Sami Khatib.

According to Heta, Stacion’s summer school endeavors to functionalize regional collaboration between artists.

“We have noticed in other endeavors, the scenes that emerged out of former Yugoslavia, [since] the countries are relatively small, and influences are partialized around broader issues… The idea of regional collaboration is that, if you combine the capacity of the region around certain issues, the possibility of influence is much higher,” he said.

On July 23, emerging artists from Montenegro, Kosovo, Albania and Macedonia will discuss potential collaboration between the countries.

“These artists are exposed to other lecturers and curators, museum directors, and so on, and this panel sort of exemplifies the nature of the project, which is about the creation of opportunities, the creation a space, people come meet in Prishtina, high-level professionals meet with new artists, lecturers, who have a common goal,” Heta concluded.

To read the full public program of Stacion’s Summer School as School visit their website.

Correction July 13, 2018: A previous version of this article incorrectly referred to Anri Sala’s “If and only if” as an exhibition. It is an artistic intervention.