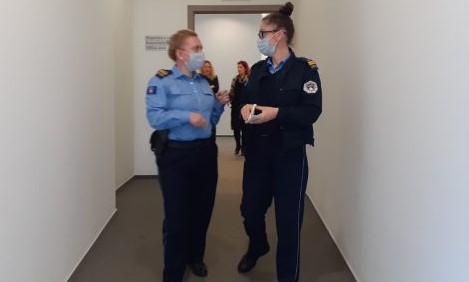 Kosovo Police arrested eight people for failing to comply with decisions taken to prevent the spread of coronavirus on Sunday, while hundreds of inspections have taken place on businesses reported to have increased prices during the epidemic.

Kosovo’s Minister of Economy Rozeta Hajdari told a press conference on Monday that the ministry’s trade inspectorate is continuing to conduct investigations into businesses reported for increasing their prices on essential items during the coronavirus epidemic.

On Thursday, BIRN reported that 228 citizens had made reports to the Tax Administration of Kosovo concerning increases in the price of goods, mostly in supermarkets and pharmacies. Hajdari revealed on Monday that the number of reports now total over 1,000.

She added that in accordance with the Law on Internal Trade, an order that will prohibit any rise in prices has been issued, stressing that the situation is under control. The minister stated that 900 inspections had taken place, with 30 instances of overpricing discovered so far.

Earlier on Monday, another four cases of coronavirus were confirmed by the Minister of Health, Arben Vitia. According to the Minister, all of the cases were recorded in the village of Stublla near Viti and involve relatives of the 77-year-old who tested positive for coronavirus on Friday. The number of confirmed cases currently stands at 13.

As institutions continue to fight against the spread of the virus, on Sunday Kosovo Police arrested six people in Peja in separate incidents for continuing to operate their businesses, in violation of government measures introduced on Friday.

A spokesperson for the Basic Prosecution Office in Peja, Shkodran Nikci, told newspaper Telegrafi that the six persons were detained for the criminal act of “failing to comply with health provisions during the epidemic.”

Two people were also arrested in Prizren on Sunday after obstructing police officers during an inspection. The individuals attempted to prevent police officers from shutting down their cafe, the operation of which is in violation of the measures introduced by the government.

The measures in effect stipulate that shops selling food were permitted to open, while restaurants were instructed to remain closed. Prishtina Mayor Shpend Ahmeti clarified in a Facebook post on Monday that businesses making and serving food were allowed to operate.

“Bakeries and qebaptores [kebab shops] have the right to sell food but not to serve it on the premises,” Ahmeti stated. “Distance should be kept while queuing and should be done outside of the premises.”

A further government measure set to come into force at midnight on Monday is the suspension of all inbound flights to Prishtina International Airport, while some outbound flights will continue to operate. A spokesperson for the airport, Valentina Gara, encouraged passengers to contact airlines for further information.

“The ban on the arrival of flights carrying passengers enters into force tonight after 00:00,” Gara stated in a Facebook post. “Until this time, all flights including arrivals will function. After this, there will be arrivals without passengers and departing flights will remain operational.”

As the epidemic continues, Kosovo citizens receiving pensions and those registered for social assistance schemes will not be required to reapply for their assistance if their approval has expired, Kosovo Minister of Finance Besnik Bislimi announced on Monday.

He added that obligations to physically report to the relevant institutions have also been suspended, emphasizing that no social assistance shall be withheld as a result of failure to do so.