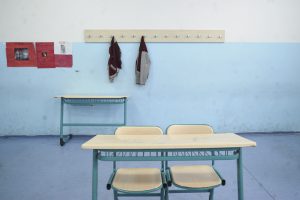 Despite a decision taken by the Kosovo Government declaring that Monday is a working day, many schools across the country did not hold classes.

On November 27, the Kosovo Government announced that Monday, November 30, will be a regular working day, calling on all state and educational institutions to work on a regular basis.

However, the Union of Education Science and Culture, SBAShK, stated that, based on the calendar for the 2020/21 school year, November 30 should be a day off in honour of Albanian Independence Day, November 28, which this year fell on a Saturday.

According to Rrahman Jasharaj, the President of SBAShK, around 90 percent of schools in Kosovo have backed the Union and closed their doors on Monday.

“We are communicating with the heads of SBAShK in the municipalities and so far we have responses from 18 municipalities,” he told BIRN. “I can say that from these first reports, the vast majority are respecting the position of SBAShK.”

Jasharaj stated that some schools in Prishtina had opened but with a limited number of students and staff, and that in Skenderaj and Dragash some schools opened their doors. He added that in Ferizaj just one school had opened, while every school in Mitrovica was closed.

In Peja, the director of education at the municipality, Besim Avdimetaj, told BIRN that 12 schools had closed, while 20 remained open, and three conducted lessons online.

The Ministry of Education and Science released a statement on Monday, calling on all educational institutions to hold classes and use all opportunities to implement the curriculum.

“The decision for Monday (November 30, 2020) to be a working day in educational institutions is a decision of the Kosovo Government and a sign of solidarity with all those who are working tirelessly in the face of the pandemic,” the statement reads.