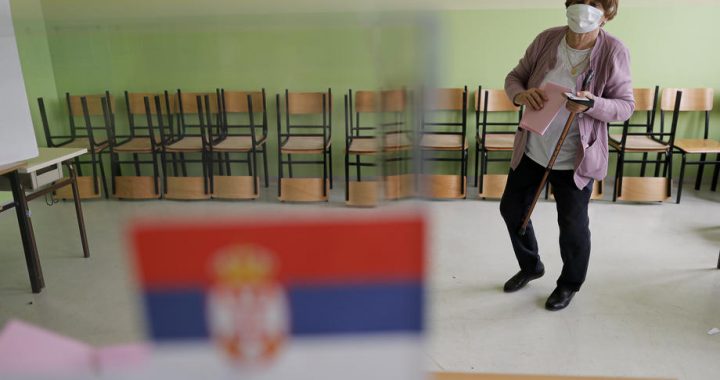 A woman wearing a protective face mask prepares to cast her ballot for the Serbian parliamentary elections at a polling station in the town of Gracanica, located near Pristina, Kosovo, 21 June 2020. EPA-EFE/VALDRIN XHEMAJ

President Aleksandar Vucic said he will impose “restrictive measures” on Montenegro and Kosovo, claiming they are restricting Serbian citizens’ right to vote in April’s Serbian general elections in their countries.

Serbian President Aleksandar Vucic has said he will announce on Tuesday the imposition of as yet unspecified “restrictive measures” on Montenegro and Kosovo over what he described as their refusal to allow Serbian citizens to vote in their countries in the Serbian presidential, parliamentary and local elections on April 3.

Kosovo’s Prime Minister Albin Kurti has said that Belgrade must first make an agreement with Pristina for voting in the Serbian elections to take place on Kosovo’s territory.

“We do not want to prevent the citizens of our republic with dual citizenship the right to vote but at the same time we cannot act in violation of the legality and constitutionality of the country,” Kurti told Western ambassadors on Monday, media reported.

Vucic accused Montenegro and Kosovo of trying to prevent Serbian citizens from exercising the right to vote in their country of residence and threatened retaliatory measures.

“Montenegro and Albin Kurti will receive an answer. They will get an answer from serious and responsible people, and it will have far-reaching consequences,” Vucic said at a campaign rally for his Serbian Progressive Party in the town of Kikinda on Monday.

The issue has caused a political row in Montenegro. The pro-Serb Democratic Front, which is part of the ruling coalition, also accused the Montenegrin government of violating Serbian citizens’ right to vote, warning that its decision will worsen the country’s relations with Serbia.

“I urge Prime Minister Zdravko Krivokapic to schedule a government session and change this shameful decision. The government must allow Serbian citizens in Montenegro to vote,” one of the Democratic Front’s leaders, Andrija Mandic, wrote on Twitter.

Radulovic said that Serbian citizens will be able to vote in Podgorica and Herceg Novi, and added that Serbia hasn’t explained why it need additional polling stations.

“No one has banned the holding of elections, but only polling stations in the embassy and consulate have been confirmed. If there are justified and practical reasons for opening additional polling stations, we would certainly consider such a request,” Radulovic said.

In Kosovo, government spokesperson Perparim Kryeziu told Kosovo media outlet Koha that Belgrade has not sent an official request to Pristina for voting to be held there. Serbia does not recognise Kosovo as an independent state and sees it as its province.

On January 15, Kosovo’s parliament adopted a resolution that opposed voting in Serbian elections on Kosovo’s territory. Prime Minister Kurti said on Friday that he wants to uphold that resolution but not to “make it impossible” for “citizens of Kosovo who may be bearers of Serbian passports to exercise their right to vote”.

Votes were cast in Kosovo in the last Serbian elections in June 2020, using a process based on a practice established in 2017, in which the OSCE take the votes from the polling stations after they close and sends them to the counting centres in Vranja and Raska in Serbia.