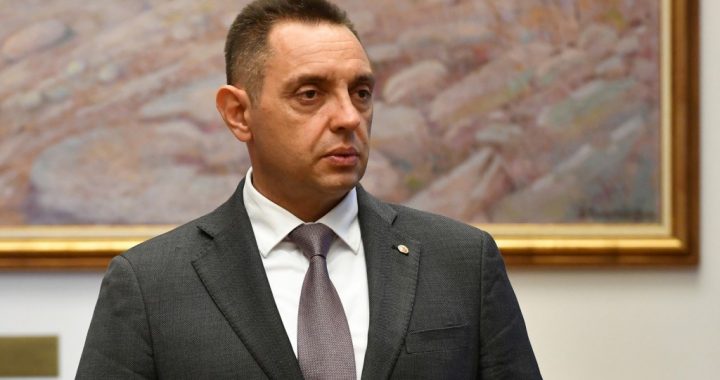 Serbian minister defends use of the term ‘siptar’

Serbian defence minister Aleksandar Vulin has dismissed complaints by Kosovo’s foreign minister over his use of the term ‘siptar’, which was labelled as hate speech by a Belgrade court in 2018.

Serbia’s Minister of Defence Aleksandar Vulin stated on Monday that he will continue to use the word ‘siptar’ despite complaints by Kosovo foreign minister Meliza Haradinaj-Stublla that it constitutes racist language.

“When they throw the word ‘Shiptar’ out of their language, whatever they start calling themselves, I will call them that,” Vulin said. “Until then, I will respect their customs and language, and I will respectfully call Shiptars what they call themselves – Shiptars.”

Vulin used the term, which was deemed as ‘offensive’ by a Belgrade court in 2018, in official press statements from the Ministry of Defence on both Friday and Saturday. In a televised interview on Sunday, Haradinaj-Stublla responded to the statements, labelling the language as “racist, insulting, and discriminatory towards Albanians.”

Kosovo’s foreign minister called for an ‘international reaction’ and wrote an open letter to the Quint Group, which consists of the Ambassadors to Kosovo from the US, the UK, Germany, France and Italy. In her letter to the Quint, Haradinaj-Stublla stated that Vulin’s language deserved “strong condemnation.”

Vulin, however, dismissed these complaints. “If Haradinaj-Stublla is ashamed of being a Shiptar, she should not be angry with me,” he stated.

The Serbian defence minister has a history with the term, having caused controversy in 2019, when he said he was “in favour of forming the border with the Siptari as soon as possible.” The National Council of the Albanian Minority in Serbia submitted a lawsuit against Vulin over the comments in June 2019, though the case has yet to be heard.

The Council’s president Ragmi Mustafa told Prishtina Insight that the use of such language “is a product of the current system in Serbia, in which institutions use discourse that incites xenophobia against minorities.” He added that the biggest indicator of Minister Vulin’s mindset was the fact he considered it a compliment to be sued over his remarks.

The Youth Initiative for Human Rights, YIHR, in Serbia has also filed a lawsuit over use of the term siptar, successfully suing tabloid Informer in 2018. Ivan Djuric, Serbia’s YIHR program director, told Prishtina Insight that the offensive nature of the term is clear.

“If using the word ‘Shiptar’ was not deemed offensive in the past, now it is used on purpose by Vulin and those like him, with a clear wish to offend, diminish and humiliate,” Djuric said.

He added that while President Vucic has not openly supported the minister’s statements, it is part of a two pronged communication strategy on Kosovo.

“It is clear that this is ‘double messaging,’ while Vucic speaks all the time about peace with the Kosovo Albanians, Vulin is insulting and provocative,” he said. “It would be a very positive message if, regardless of pressure from Moscow, Vulin would be left out of the next Government.”

For Enver Robelli, a Kosovo-born editor with the Swiss daily Tages Anzeiger, the use of the term plays into a long tradition of Serbian nationalism.

“With this word the nationalists target Albanians as a second class community,” Robelli told Prishtina Insight. “The word siptar can be compared to the n-word, which racists use to insult, taint and denigrate people of colour.”

However, Robelli added that he did not expect a reaction from the international community, particularly the EU. “In some EU member states in recent years, polarising language has become normalised in public discourse – the EU of 2020 is not the EU of 2010,” he said. “However, this should not discourage politicians in Prishtina from rejecting primitive attacks and insults by Serbian politicians.”