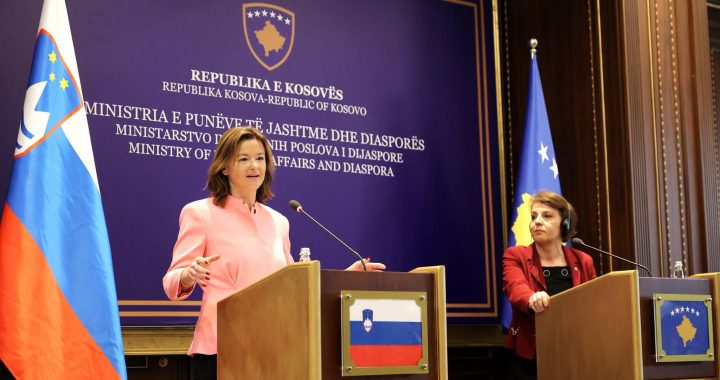 On a visit to Kosovo, Slovenian FM Tanja Fajon refused to comment on the alleged corruption case involving the Kosovo ambassador to Croatia, Martin Berishaj.

On her visit to Kosovo, Slovenia’s Deputy Prime Minister and Foreign Minister, Tanja Fajon, refused to discuss alleged financial impropriety by the ambassador to Croatia,  telling a press conference that, “the issues related to this case are dealt with by the justice system and I will not comment.”

In April 2022, it was reported that the ambassador of Kosovo, Martin Berishaj, was involved in a financial scandal after the Slovenian media outlet Planet TV reported that he had received about 600,000 euros from the Serbian branch of GEN company to his consulting company in Montenegro and then transferred the money to a Slovenian politician, Robert Golob, who is now Prime Minister.

Kosovo Foreign Minister Donika Gërvalla, after a meeting with Fajon, added that they cannot dismiss an ambassador just because of “various media speculations, without having any facts”.

“An ambassador is dismissed at the moment when there are factual reasons …[but]  I do not have a single piece of information that such violations have occurred or that violations of this nature are occurring,” said Gërvalla.

Gërvalla added that she had talked with Berishaj and was minded to organize a joint media conference with him, but he was unable right now to come to Kosovo, so it is not known when it will happen.

According to her, the media “should not continue campaigning” about this case without having arguments and facts.

“I have been looking for and continue to look for information from the state [of Slovenia] since the first speculations about the case of Ambassador Berishaj were raised, to confirm to us  if the information is true or it is just speculations of various media,” Gërvalla emphasized.

Berishaj wrote on Facebook on Saturday that he was suing the Slovenian journalist in question for defamation.

“Defamation does not pass! For the criminal case in question, my private lawsuit was filed against the Slovenian journalist who defamed me on 21.04.2022,” wrote Berisha.

He added that the District Court in Ljubljana has not yet accepted the lawsuit because there is still time for the appeal procedure.

According to Planet TV,  Golob, now PM, is being investigated internationally for some transactions he sent from a Serbian branch of the Slovenian energy supplier GEN-I to the company of the Kosovar ambassador MB Consulting. Berishaj then allegedly was to return the money to Golob, for him to invest the money to one of the italian funds that guarantee anonymity to its customers.

Berishaj has denied the accusations and warned of a lawsuit against the Slovenian media.

The spokesperson of the Kosovo government, Përparim Kryeziu, said Kosovo portals should not publish unverified news from suspicious portals.

“Spreading this ‘news’ from such a dubious portal on some of our portals, without any verification of Prava’s history and Luka Pers’ profile, is at best unprofessional and unethical. Especially when it is known that in 2021, Luka Pers’ Twitter account was suspended precisely because of the distribution of fake news,” he wrote.