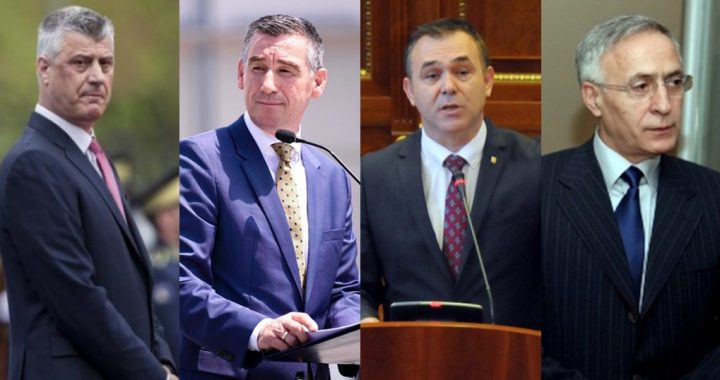 Hashim Thaci, Kadri Veseli, Rexhep Selimi and Jakup Krasniqi are accused of running a joint criminal enterprise that used torture and murder to gain control of Kosovo and remove opponents.

The indictment contains ten charges, including six war crimes charges and four charges of crimes against humanity. The charges include two counts of murder and two counts of torture, as well as persecution, imprisonment and enforced disappearance of persons.

The SPO alleges that Thaci, Veseli, Selimi, Krasniqi and other members of what is described as a Joint Criminal Enterprise, JCE, shared the common purpose “to gain and exercise control over all of Kosovo” between March 1998 and September 199. It adds that to achieve this goal, the group used means including intimidation and violence to remove those deemed to be “opponents.”

These ‘opponents’ are alleged to include people perceived to have been collaborating or associated with Yugoslav forces and officials, and those deemed not to support the aims of the Kosovo Liberation Army, KLA. According to the SPO, this included persons associated with the Democratic League of Kosovo, LDK, and persons of Serb, Roma and other ethnicities.

“Opponents were declared as ‘traitors’ and ‘collaborators’ to be ‘punished’ and treated ‘mercilessly’,” the indictment states. It adds that these opponents were intimidated, vilified, and removed, including through murder, in order for the General Staff of the KLA “to position themselves as the only legitimate voice and representatives of the Kosovo Albanian people.”

The indictment lists 42 detention sites across Kosovo and northern Albania where prisoners were allegedly detained illegally, including in Llapashtica in the Municipality of Podujevo, where 52 people are alleged to have been detained.

The indictment alleges that torture was often used at these sites, including electrocuting detainees and beating them with iron bars, rifles and baseball bats. It is also alleged that detainees were often forced to beat, and even kill, each other.

The defendants are also accused of causing deaths of persons in connection to these sites, including through killings and death through inhumane treatment. The indictment lists 39 incidents with 98 known victims.

The victims’ names are redacted from the indictment, but in point 31 it is stated that while all acts took place in the context of the armed conflict between the KLA and Yugoslav forces, “all victims were persons taking no active part in hostilities.”

Thaci, Veseli, Selimi and Krasniqi are all accused of developing the “plans, policies and practices” to further the common purpose of the JCE, as well as participating in some of the crimes themselves.

“Hashim Thaci, Kadri Veseli, Rexhep Selimi, and Jakup Krasniqi provided practical assistance, encouragement, and/or moral support, which had a substantial effect on the perpetration of the crimes charged in this indictment,” the indictment reads. “They were aware of the probability that these crimes would be committed and that their acts or omissions would contribute to their commission.”

The indictment also alleges that as senior figures in both the KLA and the Provisional Government of Kosovo, the four defendants had “effective control over the JCE Members and Tools who committed the crimes charged in this indictment.” Other members of the JCE are alleged to include former defense minister Azem Syla, NISMA leader Fatmir Limaj and former Mayor of Lipjan Shukri Buja.

Thaci, Veseli and Selimi were all transferred to the Hague to defend themselves from the indictment on Thursday. The SPO conducted raids on properties belonging to Thaci, Selimi and Veseli on Friday morning, as well as the offices of the Democratic Party of Kosovo, the party Thaci founded and Veseli led until Thursday.

Krasniqi was arrested in Prishtina on Tuesday, while his properties in Prishtina and the village of Negovc were also raided. He is set to appear before the court on Monday November 9.