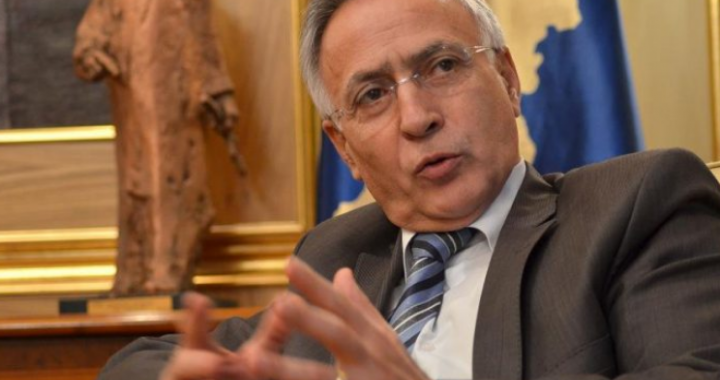 Special police units from the EU’s Kosovo rule-of-law mission EULEX arrested Jakup Krasniqi after launching a raid on his houses in the capital Prishtina and his home village of Negrovc early on Wednesday morning.

Krasniqi is now being sent to The Hague to face charges at the Kosovo Specialist Chambers, which is dealing with cases of crimes allegedly committed by KLA guerrillas during and after the Kosovo war from 1998 to 2000.

“He has left for the Hague and will appear in court soon,” Krasniqi’s lawyer, Valon Hasani, told media.

Hasani said that an indictment has been confirmed but Krasniqi’s alleged offences have so far not been specified.

Former parliamentary speaker Krasniqi was a KLA secretary and spokesman during wartime and is currently the chairman of the national council of a junior party in the governing coalition, the Social Democratic Initiative, NISMA.

Fellow NISMA members, including the Minister of Labour and Social Welfare, Skender Recica, arrived at Krasniqi’s house in Prishtina during the raid to show support.

“My dad sacrificed the most beautiful years of his life for us and your children to enjoy freedom. I’m proud of my dad, what about your kids? How do they feel about their treacherous parents?” she wrote on Facebook.

Former Kosovo Prime Minister Ramush Haradinaj, wrote on Facebook that the EULEX police operation was “not in line with the standards of democratic states” and “represented an exercise of disproportionate force that does not respect human dignity”.

Haradinaj also said that “the Kosovo Liberation Army’s war was clean and we believe in the innocence of Mr. Jakup Krasniqi”.

Further criticism came from the Council for the Defence of Human Rights and Freedoms, a Kosovo NGO, which claimed the Specialist Chambers was using “completely unnecessary force” because all the KLA suspects summoned for questioning so far “have stated that they will cooperate with international justice”.

The first former KLA member to be arrested, Salih Mustafa, pleaded not guilty to wartime crimes at the Specialist Chambers on October 28.

Meanwhile Kosovo President Hashim Thaci and the leader of the Democratic Party of Kosovo, Kadri Veseli, are waiting to see if charges against them will be confirmed by a judge at the Specialist Chambers.