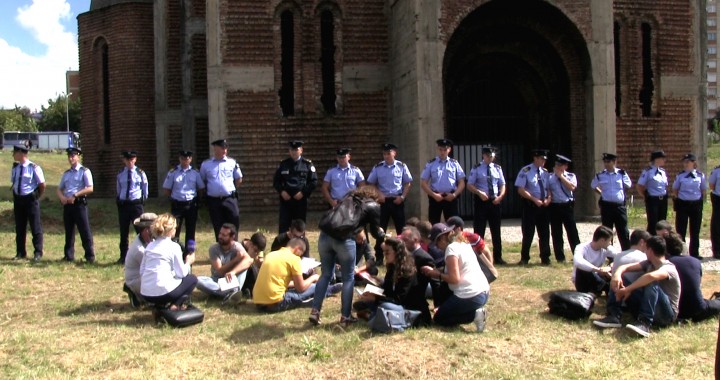 Students protest in front of the Orthodox Church. | Photo: BIRN.

Students held a symbolic action outside of the controversial Christ the Saviour Cathedral on Monday amidst the continued ownership dispute between the Orthodox Church and UP.

Around 20 University of Prishtina, UP, students gathered today in front of the unfinished Orthodox Church in Prishtina to stage a symbolic protest. The students, part of an impromptu group called “Uniteti” (Unity), sat on the lawn in front of the building readings books and holding a class. Their action was a symbolic attempt to reclaim the space, once part of the campus of the public university.

A police cordon surrounded the students as they read and talked to each other.

“We are a group of students from the University of Prishtina and are united by the principle that our campus should only be used by the students and for the students,” Edon Zenelaj, student, said.

Bekim Lumi, professor at the Arts Faculty also participated in support of the students.

Last week, members of the Serbian Orthodox community, including priests and politicians, gathered at the church to clean the site after an unknown person set fire to the building on September 11.

On Friday, following citizen reports, municipal authorities blocked the work, claiming that the Orthodox Church does not have the proper permits. After a meeting between church representatives and municipal officers, the gate was locked and the cleaning came to a halt.

On Saturday afternoon, a group of students attempted to place a placard inscribed with “This building constructed in the university campus was erected during [Slobodan] Milosevic’s chauvinist regime” on the church. The few students, part of the student group Studim, Kritike, Veprim, SKV, were obstructed by the Kosovo police.

The church has been a source of controversy since its construction began in the early 1990s. The university disputes the Church’s ownership and the legal basis for the building’s construction due to its ties to the oppressive Serbian regime. The university initiated proceedings in 2012, but no representatives from the university appeared in the hearing and the case was thrown out on the first instance.  The suit was sent to the Appeals Court on March 3, 2016.

On Monday morning, the management of the University of Prishtina released a statement expressing their hope that through “political and legal means” the property would be returned to the University.

“The management of the University of Prishtina, respectively all the professors and students, are worried and are carefully following recent developments about the building of the Orthodox Church built on the University of Prishtina property. It is widely known that the process of this building’s construction on our property, as well as the legal base for its construction, was provided by a regime that for decades promoted and used violence and terror,” the press release read.

“Nevertheless, we hope that our institutions, through political and legal means, will clarify the situation and return our property, in order for all of us together with our students to continue the path to academic advancement, free and equal for all. This stance should not be in any way construed as an interference with freedom of religion and the respect for communities in Kosovo, which are protected and respected,” the release concluded.