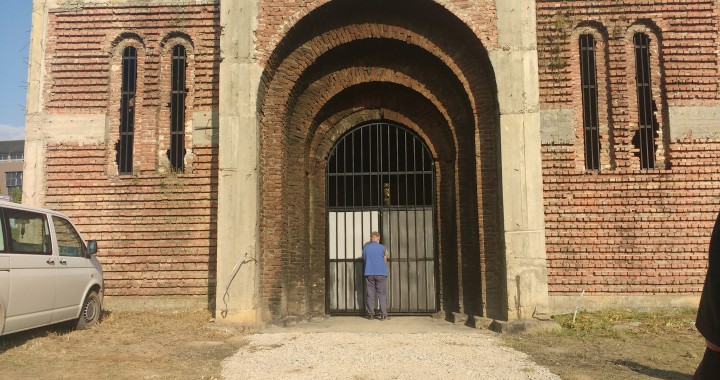 Prishtina’s municipal inspectorate halted the cleaning and painting of the consecrated but unfinished Orthodox church on the University of Prishtina’s campus.

Priests, politicians and members of the Serbian Orthodox community had been cleaning the premises for several days after an unknown person set fire to the building on Friday, September 11. Municipal authorities acted Thursday to halt the work, claiming that the Orthodox Church does not have a permit to reconstruct the church.

“The Inspectorate Directorate noticed a few individuals who refused to legitimate themselves cleaning the building. It was noticed that in the name of cleaning, a couple of walls, which had various inscriptions on them, were also painted. The Municipality of Prishtina stopped this activity and requested the involved individuals to bring the official documentation with regards to these works to the inspection directorate today. We also requested any kind of letter or work permit issued by the government of the Republic of Kosovo,” wrote Ahmeti.

The municipality, like the university, disputes the church’s ownership of the land.

“The Municipality of Prishtina does not own any documentation about this building. For more than a year, we’ve invited all parties to bring relevant documentation, but we have been ignored. We will enforce the law as far as the municipality’s competences extend and invite all parties and institutions to operate according to the Law on construction,” he concluded.

Church secretary Sava Smigic told PI that the church has full ownership of the property and that it was not building anything, but rather just cleaning the building and the area around and removing graffiti from the interior walls.

Upon the inspectorate’s request, church representatives met with the municipal officers.

“No agreement was reached,” said head of the inspectorate Salih Zyba after the meeting ended. Nevertheless, the workers and priests agreed to lock the gate of the church and leave.

The church’s construction was never finished and it has remained empty. Prominent members of the Orthodox community have indicated their desire to finish the church and make it suitable for holding mass.

After the cleaning of the Christ the Savior church in Priština the services will be served & reconstruction continue pic.twitter.com/z2jQbUq8Mg

The church has been a source of controversy since its construction began in 1995. The Church received the property in the early 1990s but did not get a building permit until the month before NATO began bombing Yugoslavia in 1999. Because of the discriminatory nature of Serbian rule at the time, this ownership is disputed by the University of Prishtina, who sees the territory as its own. The university initiated court proceedings against the church for the property in 2012. When no representative from the university came to the first instance hearing of the trial in November 2015, the court threw out the case.

In July the church was again in the headlines when police received a tip that there were mass graves on the premises. The search did not yield any results.