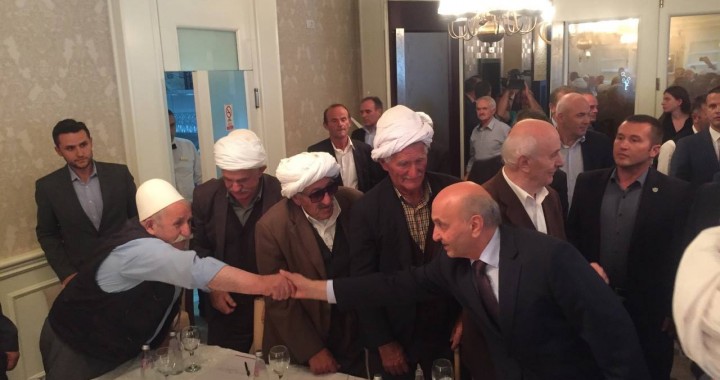 Kosovo PM met with Rugova residents on Thursday about the ongoing border demarcation issue between Kosovo and Montenegro.

The area’s inhabitants and opposition parties claim that Kosovo is losing territory.

Prime Minister Mustafa, accompanied by the Minister for Culture, the Mayor of Peja Gazmend Muhaxheri, and other officials of the ruling party Democratic League of Kosovo, LDK, visited Peja to discuss demarcation but refused to give a statement to media.

“It was a meeting with Rugova residents where most of us expressed our concerns,” explained Nikci. “Our land is being taken away. If that land is taken away, it’s like nuking us.”

Six activists from opposition party Levizja Vetevendosje were arrested on August 30 under the suspicion of being involved in attacking the Kosovo Assembly building with an RPG on August 4. In the following weeks, police discovered unexploded grenades near the homes of Murat Meha, the head of the state commission for demarcation, and Mentor Shala, director of Kosovo’s public broadcaster, RTK. The RTK building was also attacked with a grenade on August 22. A group called “Rugovasit” (from Rugova) claimed responsibility for the attacks.

On Thursday, Peja mayor Muhaxheri complained that the PM’s meeting at the Hotel Dukagjini with the residents only managed to discuss issues of patriotism.

“The arguments were about who is a bigger patriot and who isn’t… If it comes to war, I will go to the border and won’t leave,” Muhaxheri declared, reaffirming his own patriotism, but adding that it is not necessary to fight about this issue with Montenegro.

In a recent exclusive interview for BIRN, Montenegro Prime Minister Milo Djukanovic claimed that “Montenegro does not need a single meter of Kosovo land.” He also said that he was open to other solutions, such as international arbitration.

Muhaxheri considers these statements as positive.

According to a statement released by the PM’s press office, the PM will continue “consulting all interested parties, state authority leaders whose jobs are related to the border with Montenegro, and interested politicians in order to contribute to the process of explaining all issues raised regarding demarcation with Montenegro.”