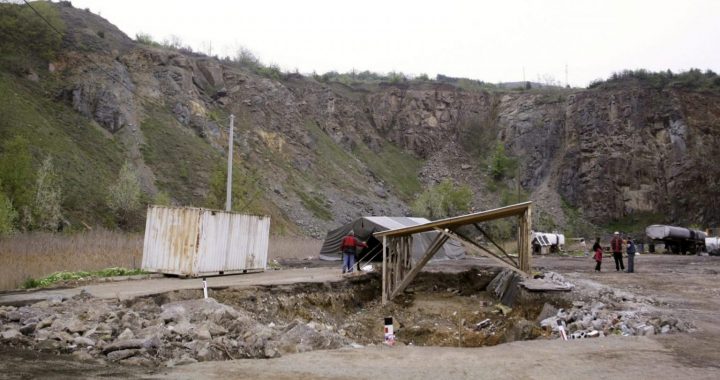 Remains of bodies suspected to be those of ethnic Albanians who were killed in the 1998-99 Kosovo war were discovered at an open-cast mine near Raska in southern Serbia.

Forensic experts from Kosovo said they found human remains at the Kizevak open-cast mine during excavations near the Serbian town of Raska on Monday.

Arsim Gerxhaliu, director of the Kosovo Institute of Forensic Medicine, told Radio Free Europe that the next steps include “forensic medical procedures, appraisal excavations, exhumations of the remains, then identification via DNA”.

The Serbian Prosecutor’s Office said it was not possible to say how many bodies are buried at the site until an exhumation is done.

“This now falls under the jurisdiction of the High Court in Belgrade, the Department for War Crimes,” Vasilije Seratlic, a spokesperson for the Serbian Prosecutor’s Office, told BIRN on Tuesday.

The Kizevak open-cast mine near the town of Raska is not far from the Rudnica quarry, where the bodies of more than 40 Kosovo Albanians killed by Serbian forces in the 1998-99 war have already been found.

Kushtrim Gara, head of the secretariat for the Kosovo government’s Missing Persons Commission, told Kosovo TV channel KTV on Monday evening, that excavations at the Kizevak location have been ongoing since 2015, but a satellite image of the site from late 2019 had moved the process forward.

“We returned to Kizevak this year, specifically these last three weeks,” Gara said.

He added that during the latest excavations, investigators “managed to find mortal remains and to mark the exact location of the possible mass grave”.

Since 2001, the remains of over 900 Kosovo Albanian war victims have been found in four different locations in Serbia. They were killed in Kosovo and then their bodies were moved to secret grave sites in an attempt to cover up the crimes.

No one has been held responsible by the Serbian judiciary for the cover-up, but the International Criminal Tribunal for the Former Yugoslavia convicted Serbian police general Vlastimir Djordjevic for his role in concealing the bodies as well as other wartime crimes against Kosovo Albanians.

The head of the Serbian government’s Missing Persons Commission, Veljko Odalovic, said in August that the Kosovo authorities had requested searches at Kizevak, at Kozarevo between the towns of Raska and Novi Pazar, and at the Stavalj mine near Sjenica.

In October, Serbian and Kosovo delegations along with representatives of the Red Cross visited a location near the Stavalj mine but found they needed more information to establish the location of a possible grave.