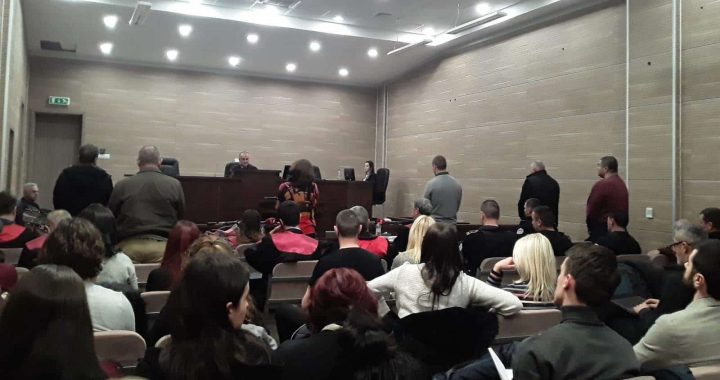 The first hearing in the murder trial at Prishtina Basic Court. Photo: BIRN.

Six defendants accused of involvement in the 2018 murder of Kosovo Serb political party leader Oliver Ivanovic insisted they were innocent as their trial opened in Prishtina.

The six defendants in the Oliver Ivanovic murder trial – Nedelko Spasojevic, Marko Rosic, Silvana Arsovic, Dragisa Markovic, Zarko Jovanovic and Rade Pasara – all entered not guilty pleas as their trial for assisting the killing of the Kosovo Serb politician began on Tuesday at Prishtina Basic Court.

Spasojevic, Rosic, Arsovic and Pasara are all accused of being part of a criminal group that organised the murder of Ivanovic, who was shot outside his political party’s office in January 2018. Markovic and Jovanovic are both former Kosovo policemen.

Spasojevic and Janovic admitted the illegal possession of weapons at Tuesday’s hearing while denying the other charges.

Prosecutor Syle Hoxha said that all the defendants had been provided with a translated copy of the latest version of the indictment, after a previous hearing was postponed because they did not have the amended document in Serbian.

But their lawyers complained that they have still not been given access to all the evidence – particularly video footage recorded by security cameras outside Ivanovic’s political party office when he was shot.

The defence lawyers also claimed that their clients were being given unfair treatment, as three of them are being held in custody and the other three under house arrest, even though the charges against all of them are similar.

The lawyers insisted that the restrictive measures should be lifted because there is not sufficient proof to implicate their clients in the murder of Ivanovic.

They also claimed that the defendants are being discriminated against because of their ethnic background, with the assumption that because they are Serbs, they are likely to abscond to Serbia.

They argued that the fact that the defendants have lives and families in Mitrovica in Kosovo and that they are in a poor economic situation are reasons why they would not abscond.

Ivanovic, the leader of the Freedom, Democracy, Justice party, was gunned down in front of his party’s office in Mitrovica on January 16, 2018.

Once seen as a hardline nationalist, Ivanovic had evolved into a political moderate who advocated coexistence between Kosovo’s Serb minority and Albanian majority. He had also become increasingly vocal in his criticism of the Belgrade government.

The next hearing in the murder trial will be held on March 16.