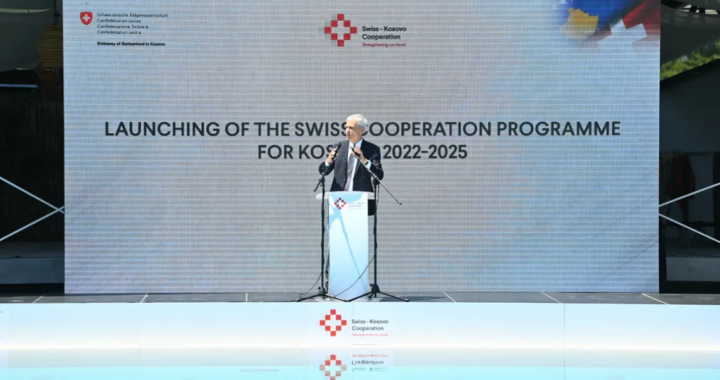 The Swiss embassy in Kosovo on Friday declared that the country will allocate 86 million euros for Kosovo to support economic projects, the development of democracy and water capacity.

At the launch of the Swiss Cooperation Program for Kosovo for the period 2022-2025, on Friday, it was announced that the allocation of 86 million euros is intended to support projects in three main areas in Kosovo: democratic governance, sustainable economic development and water capacity related to climate change.

Swiss Ambassador Thomas Kolly said that Switzerland will continue to support the partnership with Kosovo. “Kosovo has become a partner of Switzerland and we are thinking to continue this friendship that we have not only in terms of football, but also in other areas,” Kolly said.

The Deputy Director of the Swiss Agency for Development and Cooperation, Ruth Huber, also pledged that Switzerland would continue its contributions to Kosovo.

“We will work together with Kosovo to strengthen civil society and civic engagement, municipal governance, community rights and peace between neighbours, the normalization of relations between Kosovo and Serbia and the goal of having a comprehensive and transparent dialogue,” Huber said.

Huber stressed that relations between the two countries had been strong for a long time and will continue to remain so.

“This program is an expression of long-term cooperation. Switzerland-Kosovo relations are not ordinary, history has united us, the Kosovo diaspora in Switzerland has contributed to the development and prosperity of the country,” she said.

Kosovo’s Minister of Environment, Spatial Planning and Infrastructure, Liburn Aliu, thanked the Swiss state for the assistance it provided over the years.

“These friendly relations between the two countries today are more solid and powerful than ever before. Switzerland remains Kosovo’s third largest partner for bilateral cooperation and the second largest foreign investor, and this new program will further help Kosovo and our people to strengthen democracy, develop the economy and grow welfare,” declared Aliu.

The Swiss Cooperation Program for Kosovo for the period 2022-2025 emphasizes their mutual interest in maintaining and promoting prosperity in Kosovo.

Based on the experience of Switzerland and in line with the priorities set by the Government of Kosovo, the Program will support three main areas: democratic governance and peace; sustainable economic development, climate change and water and health.