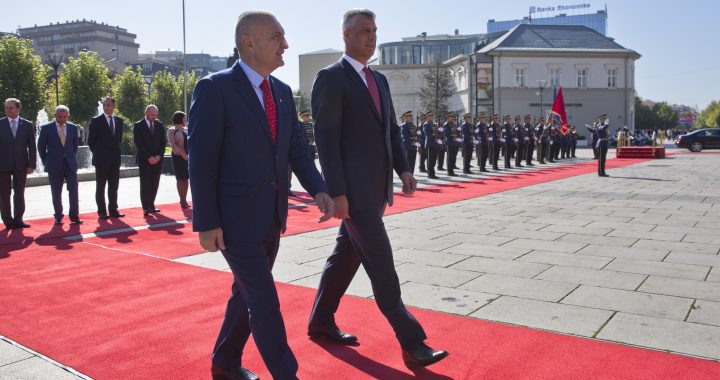 At a meeting with Albania’s President, Ilir Meta, on Wednesday in Prishtina, Kosovo President Hashim Thaci asked Tirana to offer Kosovo citizens Albanian citizenship, to help them escape their current isolation from the European Union.

Complaining that the EU had left Kosovo in “circumstances of classic isolation,” Thaci said that the only hope “at this moment for the free movement of Kosovo citizens… lies in granting Albanian citizenship to Kosovo citizens.”

The Albanian President, however, gave the idea short shrift and urged instead Kosovo to focus on resolving its vexed border demarcation agreement with Montenegro, which the EU has named as one of the keys to visa liberalization.

While Meta said that he understood Thaci’s demand and also “what is happening to Albanians from Kosovo … the solution is not for all citizens of Kosovo to be granted citizenship [of Albania] … The solution is to pass the demarcation [agreement].”

“I do not think we are hopeless when it comes to [visa] liberalization, though I am not against granting [Albanian] citizenship [to Kosovars],” he told BIRN.

A BIRN investigation revealed that the number of foreigners – mostly from Kosovo – who gained Albanian citizenship based on the criteria of “special interest” has risen since 2011, which is when Albanians obtained the right to visa-free travel to the EU.

The awarding of citizenship to six Kosovo politicians in 2016 triggered a debate in Albania over the President’s discretionary right to hand out these important privileges.