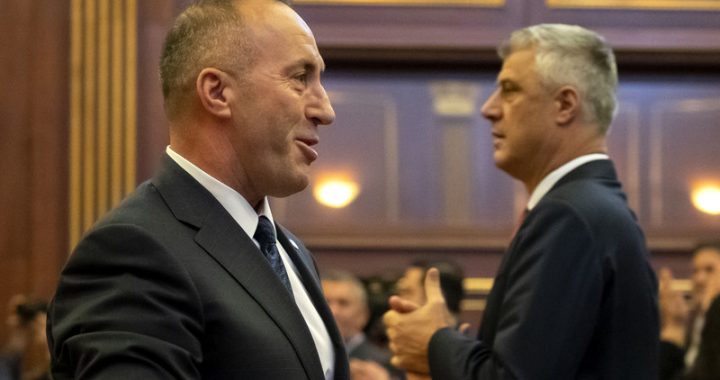 In its latest Freedom in the World report, Freedom House alleged that two veteran political leaders in Kosovo, Hashim Thaci and Ramush Haradinaj, are among various powerful figures in the country who have criminal connections.

“Major political figures in Kosovo, including former president Thaci and former prime minister Haradinaj, have links to organised crime and high-level corruption, which play powerful roles in politics and have influenced the installation of key leaders,” the report says.

Neither of the two men has responded to the allegations so far.

Freedom House said that although Kosovo has held credible and relatively well-administered elections, “its institutions remain weak, and rampant corruption has given rise to deep public distrust in the government”.

Thaci and Haradinaj, both former Kosovo Liberation Army guerrilla leaders, have been involved in politics since the war ended in 1999, in different political parties.

While Thaci led the Democratic Party of Kosovo, PDK and became the country’s prime minister and president between 2008 and 2020, Haradinaj established his own party, the Alliance for the Future of Kosovo, AAK, and served as prime minister for two stints, first in 2005 and then from 2017-19.

Thaci stepped down as president to face charges of war crimes at the Hague-based Kosovo Specialist Chambers and is currently awaiting trial. Haradinaj was acquitted of war crimes charges by the International Criminal Tribunal for the Former Yugoslavia in 2012.

The Freedom House report notes that “corruption and clientelism often pressure voters’ choices during elections” in Kosovo and that “powerful businesspeople in Kosovo may influence their employees’ political choices”.

The report puts Kosovo on its list of “partly free” countries with a political system historically characterised by its “dysfunction and instability”.

“The [Albin] Kurti government, elected in February 2021, at times struggled to effectively implement its reform-oriented platform throughout the year,” it noted.

The report also says that Serbia still maintains influence in Serb-majority northern Kosovo, where Pristina’s institutions do not have a strong presence, and that the Russian, Chinese and Turkish governments “have also exerted influence over government processes in Kosovo in recent years”.

Freedom in the World report was published on February 24, and it covers 195 countries and 15 territories around the globe.

*Note: the article was updated with the correct date and name of the Freedom House Report.