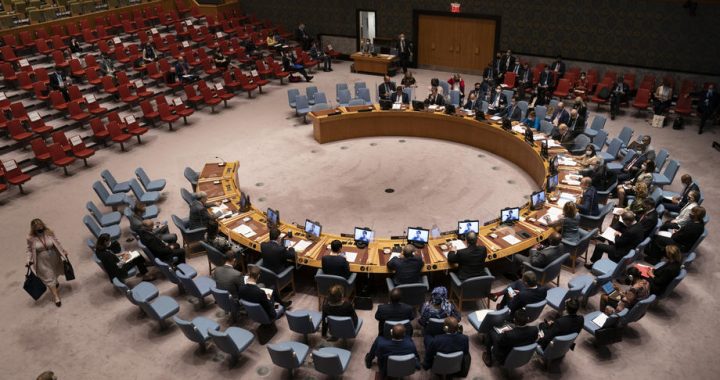 At the first UN Security Council meeting about Kosovo since the war in Ukraine began, Prishtina accused Belgrade of being Russia’s satellite in the Balkans, while Belgrade accused Prishtina of “malignant nationalism”.

At the latest UN Security Council meeting to discuss the UN Mission in Kosovo on Wednesday in New York, both Serbia and Kosovo sought to portray the other as an agent of destabilisation in light of concerns that the security situation could deteriorate in the Balkans while war is ongoing in Ukraine.

Serbian Foreign Minister Nikola Selakovic said that “the malignant nationalism of the authorities in Prishtina … creates an atmosphere of complete insecurity and leads to the exodus” of the Serb minority from Kosovo.

Selakovic said the authorities in Prishtina were “ignoring the political representatives of Serbs” and making decisions without their participation, while targeting leaders of the Serb community with “politically-mounted investigations and judicial proceedings”.

Kosovo’s Foreign Minister Donika Gervalla-Schwarz meanwhile accused Serbia of being a source of instability in the region.

“Our people made their choice a long time ago, we are part of the West, while Serbia, our northern neighbour, remains Russia’s satellite,” Gervalla-Schwarz said.

“This is quite unique in the Europe of today and it shows the main reason why our region remains unstable,” she added.

The Security Council session was held to discuss the biannual report of the UN Mission in Kosovo, UNMIK, which started operating in the country after Serbian forces pulled out at the end of the war in 1999 and administered many of its affairs until Pristina’s declaration of independence in 2008.

Gervalla-Schwarz questioned UNMIK’s role in Kosovo as it is now a sovereign country.

“UNMIK is not an administrative mission because Kosovo has a government, it is not a peacekeeping mission as Kosovo has [NATO’s Kosovo force] KFOR as a security guarantor. UNMIK no longer plays a role in the lives of its citizens and our country,” she said.

Richard Mills, the deputy US representative to the UN, made similar point, by saying that “it remains as clear as ever that UNMIK has fulfilled its purpose as outlined in Security Council’s original mandate in 1999”.

“We therefore call again on the Security Council to end UNMIK’s mandate and enable the UN presence in Kosovo to transition into a more effective role, for the benefit of Kosovo and for the entire region,” Mills said.

But Russia’s deputy permanent representative, Anna Evstigneeva, described Prishtina’s stance as towards the UN mission as “unacceptable”. Russia supports Serbia’s stance on Kosovo and does not recognise it as an independent state, and does not want the UN to take any steps that might bolster Prishtina’s sovereignty.

China also refuses to recognise Kosovo and its representative Dai Bing said that “Serbia’s sovereignty, independence and territorial integrity should be fully respected”.