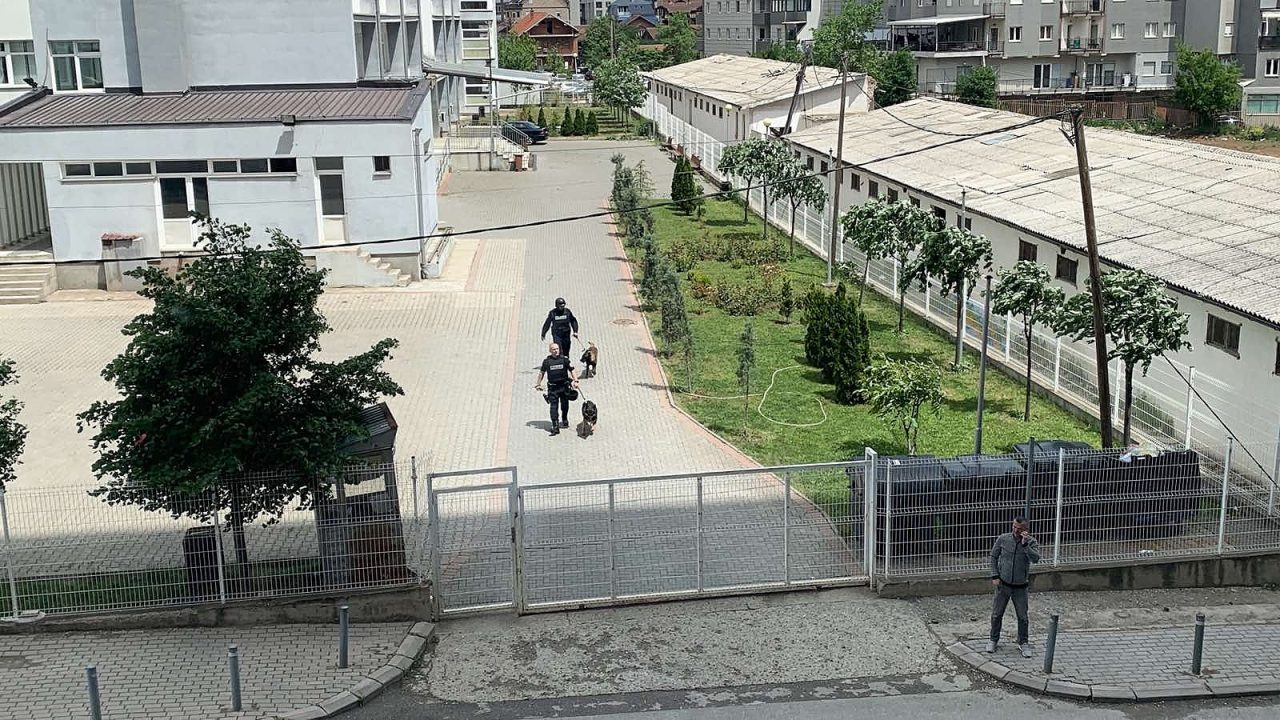 Kosovo Police verifying the bomb alert at the Xhevdet Doda high school in Pristina on May 18, 2022. Photo: BIRN/Shkodrane Dakaj

As countries all over the Balkans wrestle with a series of anonymous false bomb alarms, police in Kosovo on Wednesday reported another false alarm, this time to a Pristina high school.

“After taking all necessary operational actions, as well as detailed controls of the designated area by specialized units for the management of explosive devices, information on the alarm turned out to be false,” police spokesperson Agron Borovci told the media on Wednesday.

Police had been alerted that day about a potential bomb at the high school. The headmaster, Azem Jaha, told Radio Free Europe that classes would resume on Thursday. “Everything went alright, there is no concern,” Jaha said.

A bomb alert via email was resported on Tuesday in the building of the Rectorate of the University of Pristina. The alert also turned out to be false.

The first false bomb alarm in Kosovo was reported in December 2021, at Pristina Bus Station. Three more false alarms for bombs at the bus station followed on January 5, January 15, and February 15, 2022.

A wave of false bomb alerts has been reported in the region. Media in Serbia reported on Wednesday that a number of schools and hospitals had received fresh bomb threats and that police inspections were underway.

Serbia has experienced threats treats for some two months. The worst day was on Monday, May 16, when 97 primary and some high schools in Belgrade received bomb threats, as well as some shopping malls and bridges.

On April 18, fake bomb treats were sent to the email addresses of several shopping malls in Belgrade and Nis.

The wave of fake bomb threats in Serbia started on March 11, on Air Serbia flights to Moscow, the only flights still running to Russia from Europe.

Over the following three weeks dozens of fake bomb threats were reported on planes to or from Moscow or in Belgrade Airport.

Serbian Interior Minister Aleksandar Vulin on Monday claimed that “a special war is being waged against Serbia“ and that “the essential goal of all attacks is for Serbia to stop pursuing an independent policy and make decisions under pressure and in fear“.

Serbian Prime Minister Ana Brnabic agreed. On Tuesday she said that the bomb threats were a form of “pressure” against Serbia “from abroad, due to the non-imposition of sanctions on Russia“.

Montenegro has also faced false bomb alerts since late March. In late April some schools and some municipal buildings were evacuated in response to anonymous bomb threats.The Ministry of Education, Science, Culture and Sport said classes were suspended in 41 schools in the capital, Podgorica, and around the country – and in all kindergartens.

A professor at the Faculty of Information Technologies in Podgorica, Adis Balota, told BIRN in late April that the threats were synchronized, and appeared aimed at paralyzing institutions and spreading insecurity.