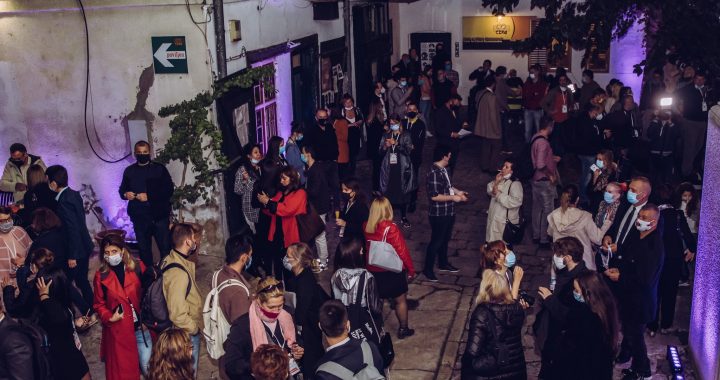 As tensions remain high between Pristina and Belgrade in the aftermath of unrest in northern Kosovo, the arts festival Miredita, Dobar Dan (‘Good day’ in Serbian and Albanian) is seeking to provide a platform for people from both societies to communicate and work together.

On Thursday, ahead of the opening of the festival in the evening, Kosovo was still reeling from violence that erupted the previous day when police conducted raids against suspected smugglers in the Serb-majority north; the unrest came not long after a border dispute that saw roads blocked by protesters and armed police units deployed.

“The political situation is always an obstacle. We live in a state of constant crisis, and the peaks of these crisis tend to happen just before or during the festival, as is the case this year as well,” Fiona Jelici from the Youth Initiative for Human Rights, one of the NGOs organising the festival, told BIRN.

Jelici said that the festival, which runs until Saturday, is sometimes overburdened by expectations “that we will provide answers to all the problems between Serbia and Kosovo, that we will react to all the injustices that citizens are going through because of their ethnic backgrounds, and that we will resolve all the difficult issues of the legacy of the past”.

“The festival is only one piece of the reconciliation puzzle,” she continied, explaining that it provides a safe space for people to “meet, cooperate, discuss, exchange ideas, and present their work”, while tackling the most difficult issues that remain unsolved in the frozen Kosovo-Serbia conflict such as missing persons or war crimes.

The first film to be shown in the festival is ‘Hold Me Right’, a documentary that explores the aftermath of sexual assault through first-hand testimonies. It is directed by Belgrade-born Daniela Stajnfeld, herself a victim of sexual abuse.

Jelici said that “due to the enormous bravery of several survivors of rape, including Daniela Stajnfeld”, public support for victims of sexual abuse has increased, but the festival wants to contribute to making this support more widespread, both in Serbia and Kosovo.

The festival will conclude with another film, ‘The Load’, an award-winning feature by Ognjen Glavonic that focuses on a Serbian truck driver transporting a mysterious cargo during the NATO bombing of Yugoslavia in 1999 which led to the withdrawal of Slobodan Milosevic’s forces from Kosovo.

Exploring the ‘Other Serbia’

Jelici said that there will also be a debate about the use and misuse of culture for political ends, and about the ‘Other Serbia’ – “part of Serbian society which is not well-known in Kosovo – oriented towards peace, towards cooperation, against ethnic discrimination – since the 1980s, until today”.

The festival, which was first held in 2014, has been targeted several times by extremists who disagree with its message of inter-ethnic tolerance, and by right-wingers online.

Jelici said that the organisers are willing to discuss the festival’s values with its opponents, but “we don’t see the space to discuss with those who want to ban or censor art, who want to ban freedom of expression, who spread ethnic hatred or threaten violence.

“In democratic societies, these values are not up for discussion, they are guaranteed,” she said.

‘Miredita, Dobar Dan’ was established to create a forum for communication outside the framework in which political leaders hold a monopoly on discussions between Kosovo and Serbia and have almost always used this to divide people rather than bring them closer together, Jelici explained.

“The festival was established to show that we as citizens, as activists, as artists, are interested in establishing new connections and forming new partnerships and friendships,” she said.

The symbol of and inspiration for Miredita, Dobar Dan is Bekim Fehmiu, a Kosovo Albanian and Yugoslav actor who achieved international renown.

The organisers describe him as “a symbol of the joint past, together with all of its challenges, achievements and misunderstandings”.

Fehmiu, who was born in Sarajevo and educated in Belgrade, shot films all over the former Yugoslavia, as well as in Italy and the US. He retired in 1987 in protest against the Yugoslav authorities’ anti-Albanian actions.

He is also known for his memoirs ‘Blistavo i Strasno’ (‘Shiny and Frightful’), in which he explored relations between Serbia and Kosovo, among other things. He died in Belgrade in 2010.

Entrance to all the events at Miredita, Dobar Dan is free. For more information, see www.mireditadobardan.com.