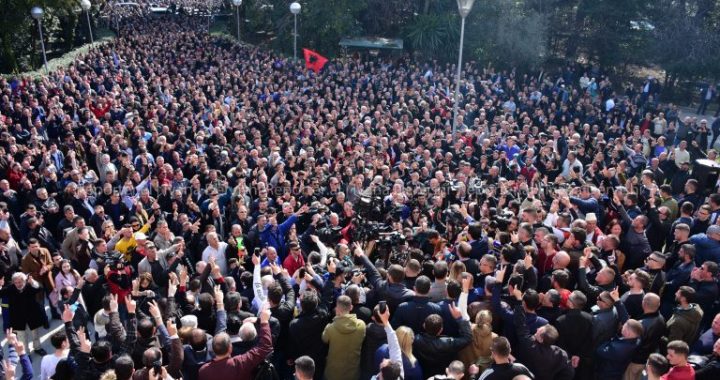 Concerns that Thursday's opposition rally could end in widespread violence ebbed as supporters rallied peacefully in Tirana – while MPs delivered their resignation letters to the country's assembly.

Opposition supporters in Albania hailed the decision of their MPs to quit the country’s assembly, as the European Commission and European Assembly criticized what they called decisions that “undermine democracy”.

Opposition parties summoned their protesters on Thursday morning to near the assembly in Tirana, where police deployed about 1,000 officers, equipped with gas masks and some in full anti-riot gear.

Police warned on Wednesday about “plans to storm the assembly” and ordered telecommunication companies to switch off signals at the area of the protest.

But no violence occurred and opposition supporters created their own cordon to separate the protesters from the police.

Some youngsters threw flares at the police before Lulzim Basha, head of the main opposition Democratic Party, led protesters toward the assembly, a few hundred metres away and near the Prime Minister Edi Rama’s office, which protesters attacked last Saturday.

As police struggled to reposition forces on Tirana’s Heroes of the Nation boulevard, the protesters dispersed peacefully.

Announcing more protests, Basha told his supporters: “Today, our journey of hope begins. Today we put a padlock on the assembly  of the crime.”

“In view of the protests in Albania today, we reaffirm the right of citizens to engage in peaceful demonstrations as an essential feature and a core value of democracy, but we strongly denounce any rhetoric by political leaders calling for violence,” it read.

The US embassy said: “The United States urges all participants in today’s demonstrations to peacefully exercise their right of assembly and reject violence, and calls on the government and security forces to practice restraint”.

The Secretary General of the Council of Europe, Thorbjorn Jagland, added: “All parties should refrain from violent rhetoric and violence on the streets.”

Albania has entered unknown political territory after the opposition decided to relinquish its MPs’ mandates. Previously, opposition parties had boycotted the assembly but not given up their mandates.