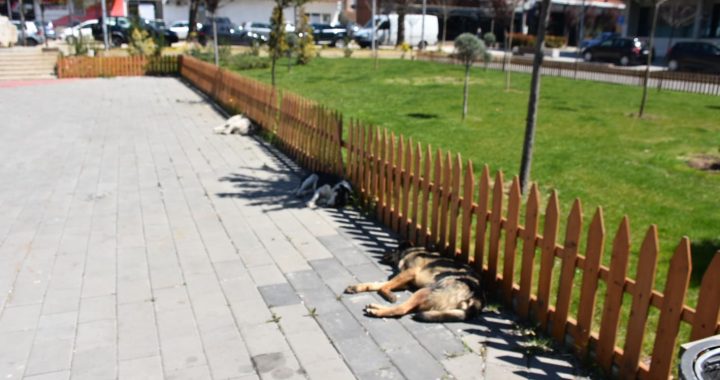 Animal rights activists have made pleas to citizens to take extra care of animals in their community as restrictions in force due to the spread of coronavirus have cut off much of their usual food and water supply.

The Kosovo Animals Rights Foundation issued a statement on Thursday alerting citizens to the plight of the country’s stray animals during the pandemic and imploring them to help look after animals in their neighbourhood while the lockdown is in place.

The blanket closure of restaurants has deprived animals of their main food source, leftovers and food thrown away in the trash, co-founder of the Animal Rights Foundation Elza Ramadani told Prishtina Insight. The lack of people on the streets also means there are less opportunities for animals to be given food by passers-by.

“Thousands of stray animals are suffering greatly from the absence of food,” Ramadani said. “For many of these animals, the current restrictions, paired with [institutions] not planning any measures for them, can result in their death.”

Ramadani noted that feeding stray cats and dogs is not only in the interests of animal welfare, but also public safety, as the absence of food can increase aggression between animals as they fight for survival. “We must not forget the various diseases that can also be caused by poor nutrition, which in addition to causing suffering to animals, further endangers public health,” she added.

The activist believes that as these animals are part of the community, and their welfare is a public health issue, it is the responsibility of either Kosovo’s municipalities or the Kosovo Government to look after them.

“Unless a solution is found by the relevant institutions, there will be many hungry dogs and cats on the streets,” she said. “Just a few heartfelt activities from citizens is not enough to alleviate this problem.”

In Prishtina, both citizens and the municipality have taken steps to address the issue of feeding stray animals in recent years. In December 2018, local businesses and restaurants donated dog food and built feeding stations that dispensed food to stray dogs around the city.

A year later, in December 2019, the Municipality of Prishtina signed a contract with Lipjan animal food production company ‘Poppins’ to provide food for strays. Poppins approached the municipality with the idea to construct feeding stations around Prishtina so that the dogs would have access to food during the winter.

As part of a pilot project, the company built five food stations, and according to Ramadani, they are waiting this month for an extended project to be approved so that they can add another 15 stations across the city.

However, outside of the capital, stray animals are not provided for by Kosovo’s institutions. “Since there is no official decision from other relevant institutions to deal with this very serious problem, the fate of these creatures remains almost entirely in the hands of well-meaning people who go above and beyond to ensure that they feed as many stray animals as possible,” Ramadani told Prishtina Insight.

The Animal Rights Foundation has provided recommendations for how to safely feed stray animals, including storing any food waste that is safe for animal consumption (no harmful foods like spices, garlic, onion, almonds, chocolate, milk, cheese, cakes) and leaving it in a clean, safe space on the ground or in a container where animals can reach it.

Until the lockdown comes to an end, short term solutions from citizens are crucial for the survival of Kosovo’s strays. “Any citizen can help, even with just a piece of bread or a little water,” Ramadani said. “Let’s not forget: Even just one bite for an animal can be the difference between life or death.”