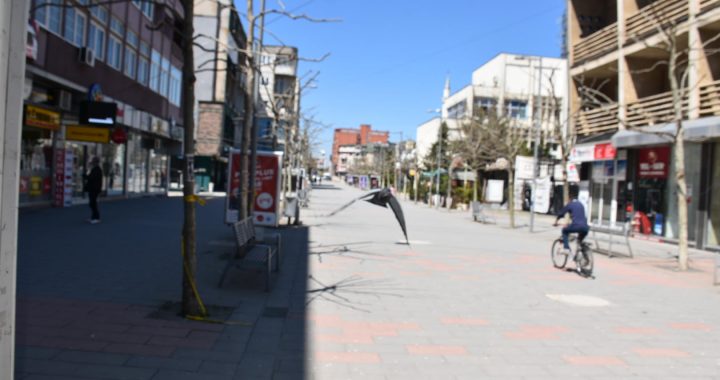 The time slot allocated for Kosovo residents to perform essential tasks will change on Saturday and alternate between two schedules for the rest of the month, while the total of confirmed cases of coronavirus has reached 449.

Freedom of movement restrictions in endangered and quarantined municipalities, including Prishtina, will alter slightly from Saturday 18 April.

However, for Saturday, Sunday and Monday, the timeframe allocated to each number will change.

The time slot for each digit will then revert back to the original timetable between Tuesday 21 April and Thursday 23 April, alternating between the two schedules every three or four days. BIRN and Internews Kosova anti-corruption site KALLXO.com has set up a platform named ‘Your 90 minutes,’ which displays personalised timetables for each digit.

According to the Ministry of Health’s decision, which is being implemented through the municipalities, freedom of movement within this timeframe is only to be used for purchasing essential items and performing financial tasks. Requirements to keep the mouth and nose covered also remain in force.

Exceptions to the restrictions, which include the free movement of essential staff and people seeking medical attention or refuge from domestic violence, will also not be altered.

The Ministry of Health reported on Friday that 65 patients are currently hospitalised at the Infectious Disease Clinic in Prishtina, 52 of whom have been diagnosed with COVID-19. The Clinic has a total of 126 beds.

Of the patients suffering from COVID-19, the ministry reported that 40 are in a stable condition, 11 are receiving intensive care, and two are in a critical condition, with one patient requiring the use of a ventilator.

The ministry later announced that a patient with the initials S.M. from the municipality of Ferizaj passed away on Friday, having been admitted to the Infectious Disease Clinic in a serious condition on 12 April.

The news brings the number of deaths of patients that have tested positive for coronavirus in Kosovo to 12. The National Institute of Public Health previously reported on Thursday night that two people had passed away during the course of the day.

The first was a 73-year-old woman from the village of Llugaxhi near Peja. The Institute reported that she tested positive for coronavirus on 26 March and had been in intensive care since 25 March. The patient also suffered from concomitant illnesses, including hypertension and cardiomyopathy.

The second patient to pass away on Thursday was a 71-year-old woman from the village of Smrekonice near Vushtrri. According to the National Institute of Public Health, she was admitted to the Infectious Disease Clinic on 5 April after testing positive for coronavirus, and also suffered from concomitant illnesses, including pulmonary infection.

The Institute also announced that 26 new cases of coronavirus in Kosovo were confirmed on Thursday, including six involving residents of the Municipality of Suhareka. Mayor of Suhareka Bali Muharremaj told BIRN that two of the six cases are new diagnoses rather than contact cases, and involve police officers from the villages of Bukosh and Krushica.

There have now been 449 confirmed cases of coronavirus in Kosovo, from 3,915 samples tested. The highest number of cases are in the municipalities of Malisheva, Ferizaj and Prishtina, while only nine of Kosovo’s 38 municipalities have no recorded cases.