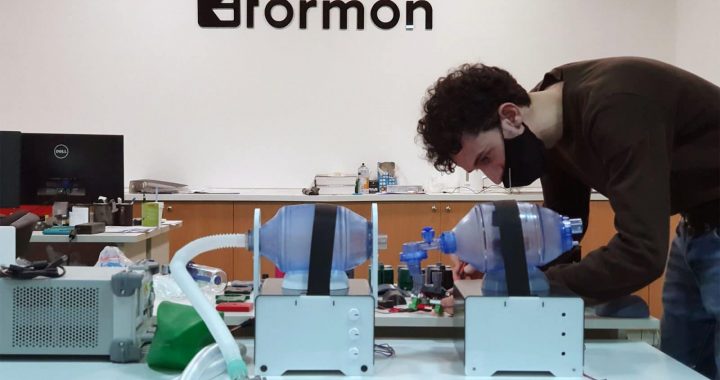 While the coronavirus pandemic has halted all daily non-essential production and business, people in Kosovo are finding innovative ways to use their free time and expertise to provide voluntary assistance to those in need, while Kosovo’s cultural community discovers new methods of entertaining the masses.

Before the coronavirus pandemic began, Rron Cena and his team at FORMON, the company he co-founded, were known for the design and manufacture of 3D printers in Kosovo.

However, business as usual has halted – not because the team is taking time off during the lockdown, but because FORMON have dedicated their manpower and resources into building ventilators to help those suffering respiratory complications from coronavirus.

“At the moment, we have stopped all production activities of our 3D printers to develop a ventilator for respiratory assistance, the lack of which has caused many problems throughout the world,” Cena explained. “We saw that this was the key for treating patients, especially those who are hospitalised because the virus has attacked their lungs.”

FORMON have developed a method for producing BVM bags, that doctors and nurses use manually to help patients to breathe, using the company’s 3D printers.

Cena discovered that the exorbitant cost of ventilators, which he says can amount to 13,000 euros each, meant that it was likely that the demand for more could not be met, both in Kosovo and abroad.

To address this, FORMON collaborated with medical experts and 10 other companies to develop a safe and cost effective alternative, named VentCore, which should be ready to begin production in the next few days. The finished products will be donated to hospitals in need.

Cena and his team are not the only ones doing their part to contribute to the needs of society during the pandemic. On Thursday BIRN invited entrepreneurs and volunteers from around the country on its televised programme Jeta ne Kosove, to share stories of what they have done to help.

Marko Rakic from the NGO Link in Mitrovica, Shaban Buza and his students from the Faculty of Mechanical Engineering at the University of Prishtina and Besart Osmani from the American Corner in Prizren are all using 3D printers to produce protective facemasks.

“My students that own 3D printers or work in studios have volunteered to produce them out of their own pockets,” Buza said. “Since Tuesday we’ve given more than 1,000 masks to public institutions, regional hospitals, family medicine centers, and will provide them for anyone else who needs them.”

Medical volunteers are grateful for the collaborative efforts that have been witnessed so far. Jehona Krasniqi, a volunteer doctor working at the Infectious Disease Clinic in Prishtina, told BIRN that these initiatives are crucial for ensuring the safety of health workers on the front line.

“According to the information that I have, we don’t have enough of this equipment, so this kind of innovative production will help a lot, especially for staff in direct contact with patients,” said Krasniqi.

According to Buza, this culture of cooperation that has developed in the wake of the pandemic must not be forgotten after the public health crisis comes to an end.

“We are doing our best to help doctors right now and they are helping us too, but this is an experience that has to continue,” he said. “Institutions have to take heed of this and cooperate with innovators and entrepreneurs. My hope is that this continuous cooperation will remain, and this will lead to both technological and economic advancement.”

Minister for Culture, Youth and Sports, Vlora Dumoshi, who also participated in the programme, noted that the most valuable contributions have come from young people. “Our youth are the strongest component of Kosovo, their innovation, their business ventures. The fact is, the biggest investment must go to them,” she said.

Youth initiatives across the country

Petar Djordjevic runs a bicycle tourism group in Gracanica, but decided that during the pandemic, his bikes could be put to better use.

“Since there won’t be any tourism this year, we created an online platform where people can order household items, and our volunteers can go by bike and deliver items to individual addresses,” he told BIRN. “This will enable people to stay at home and be supplied with anything they need, while also helping local producers and entrepreneurs to place their products online.”

Paqja Studentore, the Student Peace Organisation, have developed an online book club named ‘Stay Home and Read.’ One of the originators of the idea, Medina Pasoma, encouraged more people to sign up on Facebook to gain access to their online library and join discussions.

“Right now we are reading 1984 by George Orwell, and the next book will be Letter to a Father from Franz Kafka. We already have around 300 members, and over 50 book titles, and we are in the process of getting even more,” she said.

Citizens have also been involved in promoting fundraising efforts to support families in need. Nora Weller helped to launch the initiative ‘Nje Kafe si Flutur’ or ‘Coffee like a Butterfly,’ in collaboration with VALA and Kosovo Telecom, to raise money for Action for Mothers and Children.

“People are complaining that they miss going out for coffee, but now we have nowhere to go, we can give the one euro we used to spend on coffee to help others instead,” said Weller. “People can send one euro via SMS at any time.”

Burhan Gashi is a Roma volunteer working in Janjevo and Fushe Kosove making sure that communities in these areas get packages of food that feed their families while much of Kosovo’s economy is at a standstill.

“We have been collecting information door to door, making lists of people in need and then helping to deliver food and hygiene packages to them,” Gashi explained. “So far, we are in contact with 500 households, helping people with chronic diseases, widows and widowers, single parents and families that need these care packages the most.”

Rakic explained that his NGO is not only using their volunteers to manufacture facemasks. Link is encouraging further innovation by developing online workshops in Android programming, social network management and app security, and they have also been organising cultural activities such as martial arts and book clubs to keep young people busy while lockdown continues.

According to culture minister Dumoshi, individuals and organisations involved in the cultural sector in Kosovo are one of the most at risk communities. She says the ministry is doing what they can to both materially support those whose livelihoods are at risk and to continue providing Kosovo citizens with entertainment from their homes.

“We have been working with the independent arts community through meetings and video conferences, we’ve thought about starting filmed content of theater, ballet, and disseminating it over social media,” said Dumoshi. “Films are being broadcast on TV, and the Kosovo Philharmonic had its first concert on TV on Constitution Day. So far, these have been well received, with many viewers online and via television.”

According to Dumoshi, subsidies are being provided by the Ministry to sustain cultural activities across the country, including support for the country’s theatre scene.

Erson Zymberi, a theatre director in Gjilan, said that they have worked to find alternative methods of staying connected with their audience, firstly by showing their plays live over social media. “We marked March 27, the International Day of Theatre, by showing our first play, named ‘The Play that Goes Badly,’” he said. “We had great viewership, around 20,000 people watched it in 24 hours, a lot for a theater with only 296 seats.”

According to Zymberi, live streaming performances is the best current solution his theater has to maintain its links with the public. “Despite the numbers, nothing can replace live theatre and the feeling that you get from seeing a live play,” he said. “Cultural life is important for people, and we’ve been greatly affected by this.”

According to Ardian Morina from the Kosovo National Theatre, more than 70,000 people have watched the plays that the theatre has streamed online. “I believe that after seeing the shows online, people will want to come and watch them live as well,” said Morina. “Hopefully, people will return this favour to us once the pandemic is over and come see the plays in person.”

Popular online media platforms in the country are also finding innovative ways to keep people entertained. According to Doresa Rexha from Gjirafa, they are passing over creative license to their staff at home to continue producing content for their viewers.

“We are having a creativity boom,” she said. “We are focusing on individual personal production of videos by providing technology to actors of our TV shows, who are recording content from home. We are also producing around three quizzes each week, with our hosts presenting them from home.”

While Rexha says Gjirafa is eager to continue production during the pandemic, their reliance on advertisement revenue means that they will not be able to support their employees for much longer. “We will be safe for another two or three months, we have different platforms that are able to support each other,” she said.

Minister Dumoshi acknowledged that cultural and artistic activities are likely to take a huge economic hit as a result of the coronavirus pandemic. According to her, the ministry is in the process of allocating its budget to subsidise independent organisations and individuals in this sector that are struggling.

“For culture, 9.8 million euros of our programme budget is for subsidies,” said Dumoshi. “The Ministry of Finance has allocated a fund of five million euros exclusively for emergency assistance during the pandemic.”

However, it is not clear when and how this emergency funding is expected to be distributed.

“We are currently waiting for the Ministry of Finance to explain how these funds are to be allocated,” she said, adding that a working group at the Ministry would be required to look into the matter further and develop the criteria for people to apply for assistance.

Buza is proud of what his students at the Faculty of Mechanical Engineering have been able to accomplish in the face of a public health emergency. According to him, it is now the responsibility of both the government and Kosovo’s young people to continue their collaborative efforts into the future to support Kosovo’s economic, cultural and technological development.

“Now is the time for the youth with all its capacities, intellectual and material, in cooperation with educational institutions and the state, to maintain this close cooperation, because until now they were separate,” he said. “This situation showed us how important communication is. Hopefully this will not be forgotten.”