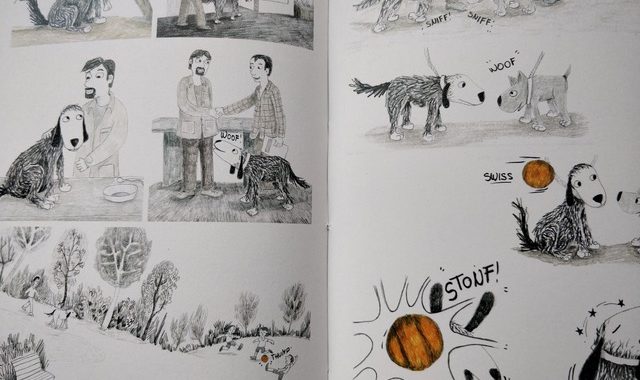 Kosovo’s Animal Rights Foundation has published ‘Teo, the Street Dog’, the first in a series of educational illustrated children’s books which are aimed at showing children how to empathize with animals and is part of a wider program to improve the lives of strays in the country.

On Thursday, at the Kosovo Resource Center in Prishtina, the leading animal rights organization in Kosovo, Fondacioni per te Drejtat e Kafsheve (Animal Rights Foundation), launched ‘Teo, the Street Dog’, an illustrated children’s story about a stray dog in Peja. The book will be part of a series published in cooperation with Associazione Trentino con i Balcani, ATB, an Italian development organization working in Peja.

“The book is Teo’s story of finding a home and a family,” said Elza Ramadani, the co-founder and CEO of Fondacioni per te Drejtat e Kafsheve. “He has difficulties finding food, he experiences maltreatment and all the other things that stray dogs have to go through to survive.”

According to Ramadani, the aim is for the books to become part of an extracurricular program in elementary schools and high schools around the country.

“The book has no words, so that kids are able to use their imagination and create their own stories around the images,” she said. “We are hoping to teach children how to empathize with animals that have to live on the street. It is a chance for young kids to realise that they are worthy of our respect.” 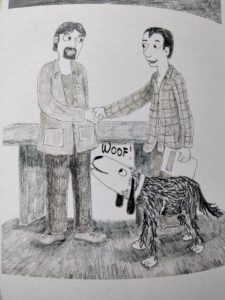 Maurizio Camin, the director of ATB, explained that their organization decided to support the book’s creation after the death of one of their colleagues, Rosanna, in a traffic accident.

“Rosanna was a dog lover, and when she wasn’t working she would wander the streets of Peja finding strays to feed or organizing their adoption,” Camin told Prishtina Insight. “After Rosanna died, her mother reached out to us so we could do something concrete in her memory. This book carries the spirit of Rosanna, and reminds us of what she was trying to accomplish.”

For Camin, the series of books can be a gateway to a new outlook on humanity’s place in the world. “As environmental problems get worse and worse, we need institutions to get young people involved in conversations like this,” he said. “‘Teo’ is more than just a book, it is part of something bigger.”

Representatives from the Municipality of Prishtina attended the book launch on Thursday, endorsing the series and announcing a number of collaborative projects the municipality has organized alongside Fondacioni per te Drejtat e Kafsheve.

“Animals are part of our lives and our planet, they have a place here and deserve to live as best as possible,” said Adrian Berisha, a member of the Municipal Assembly. “The book is one of the awareness raising tools that the Municipality plans to use to educate people on the humane treatment of animals from a young age.”

According to Berisha, plans are in place to build a temporary care center for stray animals in the Hajvalia neighborhood in Prishtina in cooperation with Fondacioni per te Drejtat e Kafsheve. The center would neuter, sterilise and vaccinate dogs and cats, and care for very young animals or those in bad health. An adoption campaign will also be continuously run from the center.

Granit Gashi, the co-founder of Fondacioni per te Drejtat e Kafsheve, said that this is hopefully the beginning of better cooperation between public institutions and animal welfare organizations. “Kosovo is now just beginning to revive its connection with animals, hopefully moving this issue away from the private sector,” he said.

Camin from ATB also welcomed institutional involvement in animal welfare issues. “It is encouraging to see the municipality pay attention and deal with the politics of non-humans, trying to empathise and speak about the dignity and the worth of animals,” he said.

In 2018, more than 1.3 million euros was allocated to the Kosovo Food and Veterinary Agency to implement the ‘Catch, Neuter, Vaccinate, Release’ program for stray dogs, but according to Ramadani, implementation has not been adequately monitored and there have been many allegations of misuse of public funding concerning the program.

Earlier this year, Fondacioni per te Drejtat e Kafsheve was given permission by the Municipality to monitor and supervise the center in Harilaq that vaccinates and sterilises stray dogs. “We have received a lot of complaints about the way the animals have been treated there, and we wanted the chance to raise our voices in opposition to this treatment,” said Ramadani.