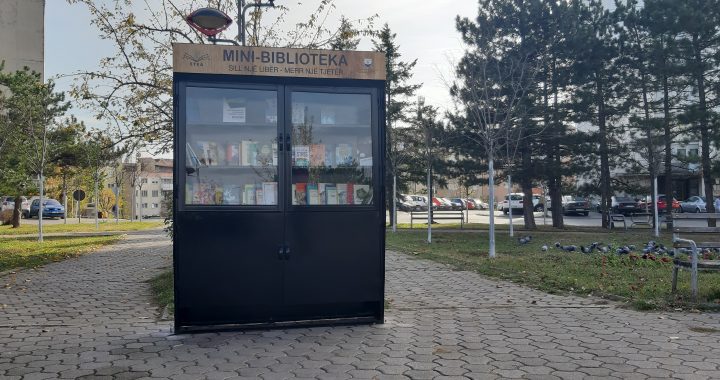 An initiative to promote literacy in the Municipality of Prishtina will build 12 outdoor mini- libraries around the city, encouraging readers to “take a book, leave a book.”

As part of a project organized by a local NGO, the second outdoor mini-library was opened in the neighborhood of Ulpiana on Friday, and ten others are expected to be completed by December 31.

“More than 100 books will be at the disposal of the residents of the neighborhoods for all those interested in exchanging books or borrowing them while staying in the neighborhood,” said ETEA, a local NGO, whose aim is to strengthen public education in Kosovo through the promotion of reading and literacy.

The first open-air library was opened on November 5 in the neighborhood of Dardania with the support of the Municipality of Prishtina. According to ETEA, the libraries project has had a positive response so far.

“The library in Dardania was well received by citizens of that zone, with people bringing many books,” said Agon Ahmeti, the director of ETEA.

The libraries will be accessible 24 hours a day and will be in the responsibility of residents of neighborhoods and readers.

Representatives from ETEA said they hope this initiative will contribute to the promotion of literacy in the country in the face of modest investments by the Kosovo Government into books and activities related to reading. In 2018, only 56,000 euros were allocated to libraries by the Ministry of Culture, Youth and Sports, while only 160,000 euros were allocated towards books and reading activities. The same totals are foreseen for 2019.

Over the last decade, an absence of investment and institutional care has resulted in the closure of 53 libraries in Kosovo. With only five new libraries being opened, the country is left with a total of just 107, signalling a drastic decline in reading spaces in the country.